Home Weather News Why Will the Upcoming Cyclone be Named ‘Mandous’? 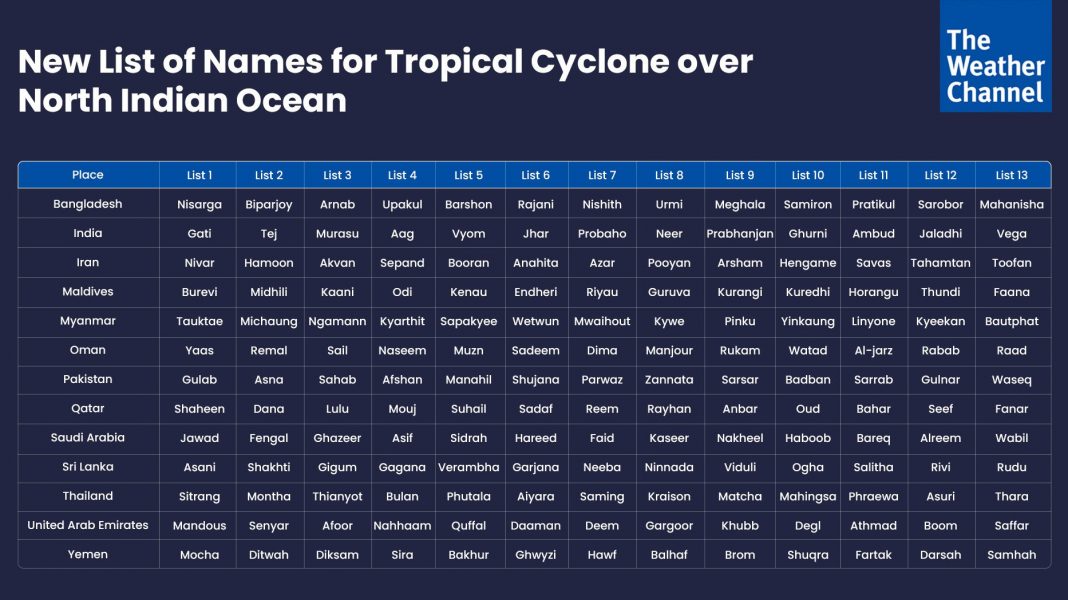 The 2022 North Indian Ocean cyclone season looks set to conclude with a bang, with the Bay of Bengal witnessing the birth of a rare December cyclone. Currently on the verge of intensifying into a depression over southeast BoB, this system will strengthen into a Cyclonic Storm by December 8, after which it will be named Cyclone Mandous.

But why the name Mandous, who decided it, and how?

Before diving into the process, we must first understand its purpose: why are cyclones even named? This practice follows a decree issued by the World Meteorological Organisation (WMO), which explains that each cyclone must be named to avoid confusion — especially in a scenario where multiple systems operate in one location.

These names, along with tropical cyclone advisories, are issued by six regional specialised meteorological centres (RSMCs) and five regional Tropical Storm Warning Centres (TCWCs) from around the world.

The India Meteorological Department (IMD), one of the six RSMCs, is the recognised authority for India and a dozen other countries in South and Southeast Asia. These include Bangladesh, Iran, Myanmar, Maldives, Oman, Pakistan, Qatar, Saudi Arabia, Sri Lanka, Thailand, United Arab Emirates (UAE) and Yemen.

At present, the names for cyclones impacting this region are being picked from the list published by the IMD back in April 2020. It consists of 169 names, with each of the aforementioned countries offering 13 titles. The 169 names are placed into 13 lists, each consisting of at least one submission from every nation.

The names of the countries are alphabetised, and their recommended titles are then assigned to the new cyclones. One list is utilised completely before moving on to the next.

So far, 11 names from the current compilation’s List 1 have already been used. These include the names Nisarga, Gati, Nivar, Burevi, Tauktae, Yaas, Gulab, Shaheen, Jawad, Asani and Sitrang. And now, Mandous — a name suggested by the United Arab Emirates — is the next in line.

The previous cyclone, dubbed Sitrang, had impacted India’s eastern coast during the 2022 Diwali week late in October. And as for the upcoming Cyclone Mandous, the latest forecast indicates it is expected to reach southwest Bay of Bengal (near north Tamil Nadu and adjoining south Andhra Pradesh coasts) by the morning of December 8.

Under its influence, rough sea conditions in the Bay of Bengal and very heavy downpours across India’s southeastern coast have already been predicted. However, a complete picture of the full extent of its impact, subsequent evolution and the location of its landfall will only become clearer as the week progresses.

For weather, science, and COVID-19 updates on the go, download The Weather Channel App (on Android and iOS store). It’s free!