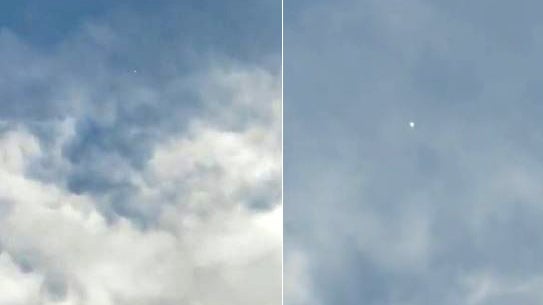 A white-coloured flying object spotted in Hyderabad sky on Wednesday arose curiosity among people and also sparked all sorts of rumours, including of it being an Unidentified Flying Object (UFO).

The “strange phenomenon” was witnessed in the morning, and soon people started sharing videos and photographs of the same on social media and wondering if it was a planet, a star, or a UFO.

However, the experts clarified that it was a helium balloon released for advanced atmospheric study.

Planetary Society of India Director N. Raghunandan said he received queries from many people about the white-coloured object.

According to him, it is just a research helium balloon sent for atmospheric studies, which was released by the National Balloon Facility, a stratospheric balloon launch base under the joint management of the Tata Institute of Fundamental Research (TIFR) and the Indian Space Research Organisation (ISRO). The balloon facility is located in Hyderabad.

Raghunandan explained that a helium balloon carries nearly 1,000 kg of scientific instruments assembled by scientists for the study.

He pointed out that TIFR Balloon Facility had announced that month that it would release a research balloon. Such balloons help calculate the pressure, temperature, humidity and wind speed changed at various altitudes. Atmospheric-sounding graphs are drawn from this, which helps in predicting the weather.

Meanwhile, in the afternoon, a helium balloon fell at Marpalli in the Vikarabad district near Hyderabad. It is believed to be the same object seen flying over Hyderabad in the morning.

Officials from National Balloon Facility reached there and took control of the balloon and its instruments.