U.S. employers posted a fresh record 10.1 million job openings in June, as companies struggle to lure workers back into the job market and fill open positions.

Job openings, a measure of labor demand, rose by 590,000 to 10.1 million on the last day of June, the Labor Department said in its monthly Job Openings and Labor Turnover Survey, or JOLTS report, on Monday.

Hiring also rose to 6.7 million in June from 6.0 million in the prior month. Yet the latest data show that 8.7 million remain on unemployment benefits, meaning there are more jobs available than job seekers for the first time since the pandemic began.

The gap between openings and hiring suggests that firms are scrambling to find workers. A record low 1.3 million people were laid off or fired in June.

Total job openings in the US exceeded 10 million in June for the first time, as companies struggle to lure workers back into the job market and fill open positions 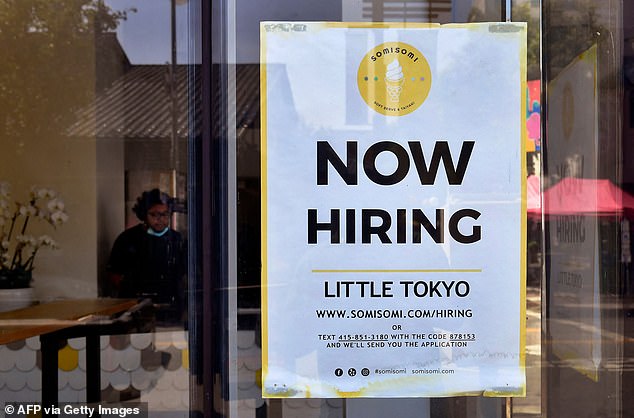 A ‘Now Hiring’ sign is posted in front of an ice-cream shop in Los Angeles, California

On Friday, the Labor Department reported that the economy generated 943,000 net new jobs last month and the unemployment rate fell to 5.4 percent from 5.9 percent in June.

But as the economy rebounds from the devastation of the pandemic, the recovery has been hampered by labor shortages in a variety of key fields.

Trucking has been particularly hard hit by a shortage of workers, leading to supply chain disruptions across the country.

The transportation, warehousing, and utilities sector had 460,000 unfilled openings in June, a 48 percent increase from a year ago, according to the new data.

The worker shortage in restaurants and retail stores is even more dire. The accommodation and food services sector had 1.4 million opening in June, an 85 percent increase from a year ago, while retail trade opening were up 75 percent to 1.1 million.

In the restaurant industry 10.2 percent of all positions remained unfilled in June, the highest rate of any sector, according to the report. 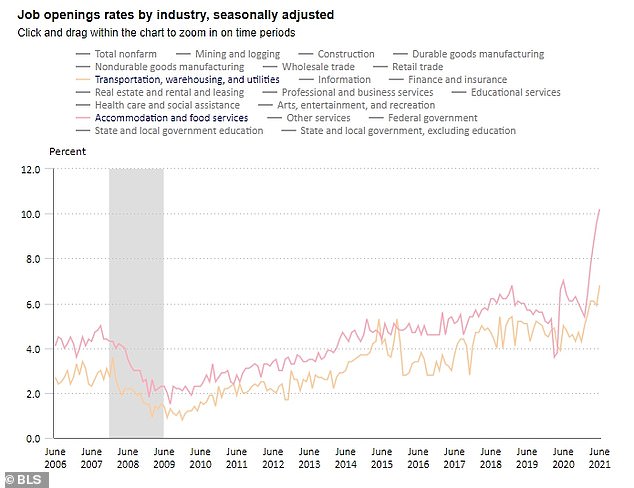 Restaurants (pink) have the highest job opening rate at more than 10%, while worker shortages in trucking (orange) have spurred supply chain disruptions nationwide 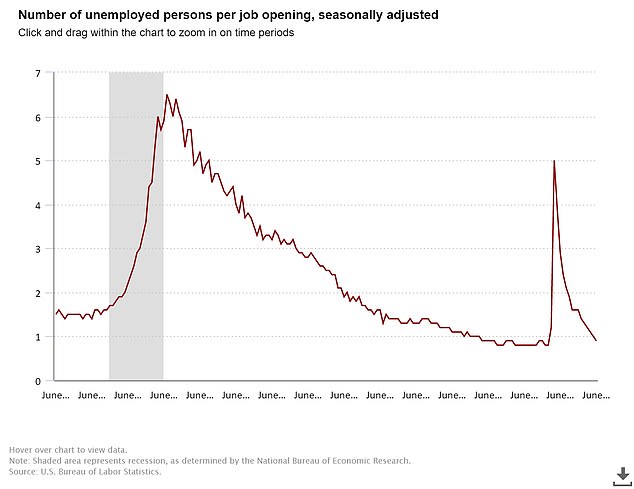 The ratio of unemployed persons per job opening dropped below 1 for the first time since the pandemic began, meaning there are more openings than job seekers

Many businesses blame generous federal unemployment benefits – including an extra $300 a week tacked on to regular state jobless aid – for discouraging Americans from seeking work.

In response, many states have dropped the federal unemployment assistance even before it is scheduled to expire nationwide on September 6.

Many Americans may also be staying out of the job market because of lingering health fears and trouble obtaining childcare at a time when many schools are closed.

Adding to the problem is a sharp decline in the labor force participation rate, the percentage of the population is either employed or seeking a job.

The overall US labor force participation rate, which has been declining steadily for two decades due in part to demographic shifts, stood at 61.7 percent in July, a rate lower than it had been before the pandemic since the 1970s. 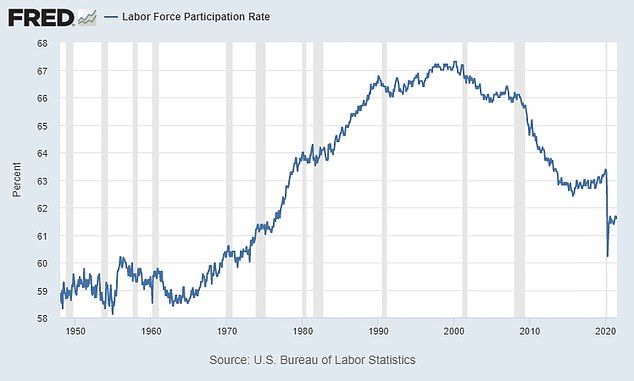 The overall US labor force participation rate, which has been declining steadily for two decades due in part to demographic shifts, stood at 61.7 percent in July

The coronavirus triggered a brief but intense recession last spring, forcing businesses to shut down and consumers to stay home as a health precaution.

The economy lost more than 22 million jobs in March and April 2020. Since then, though, it has recovered nearly 16 million jobs, leaving a 6.8 million shortfall compared to February 2020.

The rollout of vaccines has encouraged businesses to reopen and consumers to return to shops, restaurants and bars that they had shunned for months after the pandemic struck.

Many Americans are also in surprisingly strong financial shape because the lockdowns allowed them to save money and bank relief checks from the federal government.

Clouding the outlook for jobs is a resurgence of COVID-19 cases caused by the spread of the highly contagious Delta variant.