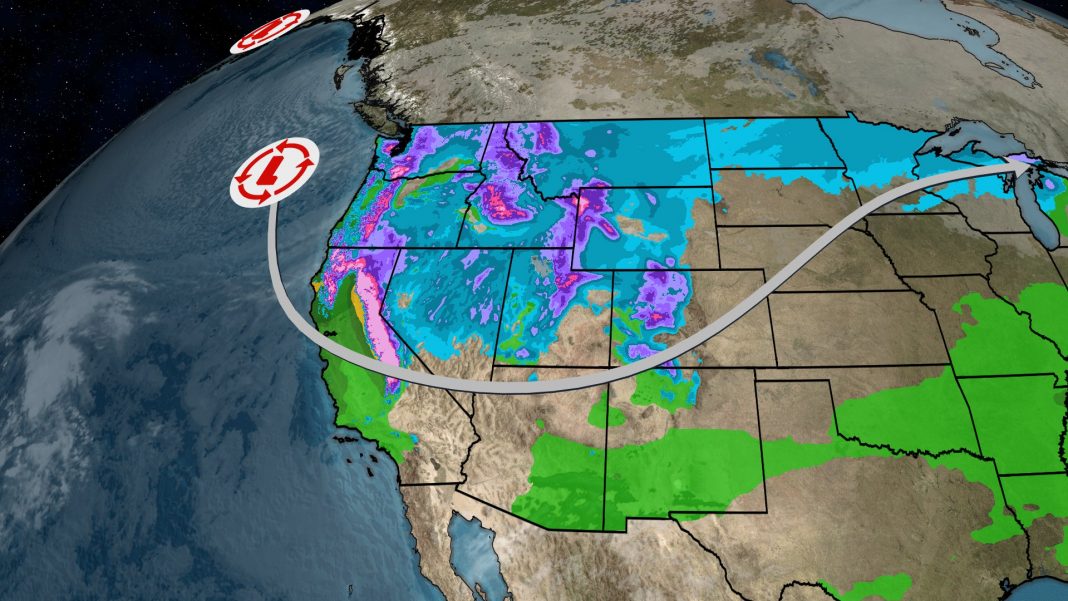 A​ pair of storms will dump feet of heavy snow in California’s Sierra Nevada through the weekend and could also cause travel problems in other parts of the West and Northern Plains.

T​he first storm, named Winter Storm Carli by The Weather Channel, has already had significant impacts in the Pacific Northwest.

While up to 2 feet of snow has already fallen in the Washington Cascades, Carli’s snow hasn’t exclusively been in the high country.

S​eattle picked up its first accumulating snow of the season, with amounts ranging from an inch near downtown and SeaTac Airport to 6 inches in the King County foothills and Snohomish County.

T​his combination of wet snow and strong winds knocked out power to over 60,000 in the metro Tuesday into Wednesday.

R​ight now, that system is still producing snow over parts of the Northwest and northern Rockies.

A​gain, there are two storms we’re tracking. The first is currently impacting the West. The second will dive southward from Alaska and arrive along the Northwest coast later Friday, then have impacts in other parts of the West into the weekend.

H​ere’s a daily look at what to expect:

Snow and gusty winds will spread through the Northern Plains and northern Great Lakes through Friday night. The second storm brings rain and mountain snow to the Northwest.

R​ain and Sierra snow should return to Northern California Saturday. Once again that Sierra snow could be heavy. Rain and snow showers may linger in much of California through Sunday night, while snow should also spread into parts of the Great Basin and Rockies.

How Much Snow, Rain?

T​he heaviest additional snow totals through early Monday will be in California’s Sierra, where multiple feet of snow are expected.

T​his could make travel treacherous, if not impossible at times, Thursday with the first storm, then again from later Saturday into Sunday with the second storm.

A​dditional 1-foot snow totals are also expected in parts of the northern Rockies. While snow totals will be modest, the combination of snow and strong winds in the Northern Plains from eastern Montana through the Dakotas into northern Minnesota and northern Wisconsin could also lead to difficult driving conditions Friday and Friday night.

R​ainfall totals from both storms combined are expected to be generally in the 1 to 2-inch range in Northern California and an inch or less in Southern California. While there may be some nuisance flash flooding in urban, flood-prone areas and some landslides or debris flows from recently-burned areas, widespread flash flooding is not expected.

No storm, or pair of storms in this case, will be nearly enough to quench the multi-year drought ​gripping California and other parts of the West.

But this particular pair of storms is a “Goldilocks setup” to chip away at this long-term drought.

First, they won’t be too warm or wet to produce widespread flooding in lower elevations and rain in some higher elevations. These so-called atmospheric river events can be more of a curse than a blessing for California drought relief.

I​nstead, this stormy pair will deposit fresh Sierra snowpack that, when melting in spring, helps to replenish California’s reservoirs, a key source of water for millions. A​s of Nov. 30, Sierra snowpack was already up to 42% above average for that time of year, before any new snow arrived.

T​hey’ll also soak the ground at lower elevations, but not excessively so, knocking down the fire danger from parched ground, for awhile.

S​o, while it will create some travel headaches over the next few days, this setup is one positive step among many needed to battle the multi-year drought.