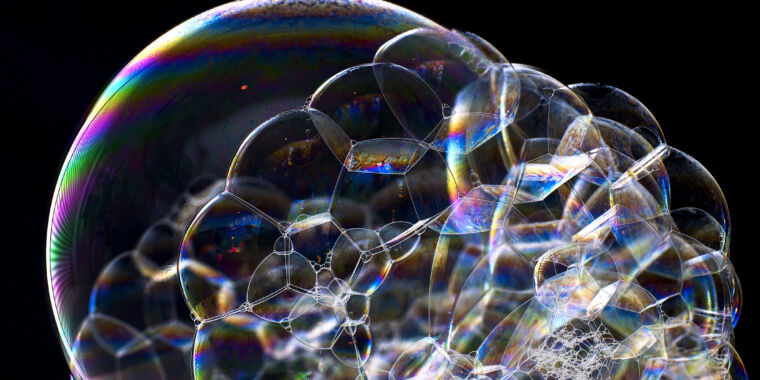 Blowing soap bubbles, besides being a favorite pastime for children, also happens to be an art form and a subject of interest for physicists. Emmanuelle Rio, François Boulogne, Marina Pasquet, and Frédéric Restagno from the Laboratory of Solid State Physics at the University of Paris-Saclay have been studying bubbles for years, trying to understand the different processes at play in these innocuous-looking structures.

“Bubbles are important as they appear in many places, including washing products, cosmetics, building materials, and also in nature. For example, sea foam plays a role in terms of the exchanges between the atmosphere and the sea,” Boulogne said.

Now, the team has described a key event in the life of bubbles: when they pop.

In a recent study, Boulogne and Rio established the role played by the temperature of the bubbles’ surface in their stability. “In some cases, the aging of the bubbles and their bursting has been associated with the thickness of the soap film. Recently, researchers began associating the thinness of the soap film with evaporation. However, in our study, we pointed out that heat transfer, which is associated with evaporation, wasn’t taken into account,” Boulogne said.

Boulogne stated that although there is a link between temperature and aging of the bubbles, the impact of low temperatures on when the bubbles pop remains to be understood—and is likely to stay that way for a while. “So far, we have no model that can make this prediction. Understanding the stability of bubbles is a challenge that will take several decades,” he said.

He reasoned there are several factors that need to be considered when it comes to the stability of bubbles. “This includes temperature, rate of evaporation, film-thinning, marginal regeneration (the phenomenon of small patches, which are thinner and lighter than the surrounding film, rising toward the top), and geometry. To have all these factors in a single model is very challenging.”

While predicting the stability of bubbles in different scenarios may take some time, Rio identified an optimal combination of ingredients to make bubbles last longer while at the same time being easy to create.

The key to longevity is glycerol. The other ingredients include a long polymer like the naturally occurring guar gum and “optimum proportion” of dishwashing liquid. “If you add more dishwashing liquid, creating bubbles becomes easier. However, their life time is shortened. That’s why you need to find the right amount of dishwashing liquid to ensure bubbles last long enough and are easy to generate,” Rio said.

Working with the French artist Pierre-Yves Fusier, who specializes in bubbles art, Rio and her colleagues developed the recipe, which consists of 40 milliliters of dishwashing liquid, 100 milliliters of glycerol, and 1 gram of long polymer such as the naturally occurring guar gum mixed in 1 liter of water. Using this recipe, Rio created 5 cm-diameter bubbles in her laboratory that lasted an hour.

While adding glycerol may make the bubbles more stable, Rio said the impact of other ingredients on the bubbles’ stability is still an open question. “Glycerol is a hydroscopic molecule which can help condensate water. But we know the surfactant (dishwashing liquid) and the polymer also impact evaporation. The next step in our study, therefore, is to find out how our recipe impacts the evaporation,” Rio said.

Rio added that evaporation, which is yet to be completely understood, is just one phenomenon that plays a role in bubble bursting. “You also have to consider gravity, which contributes to thinning of the surface that leads to the fluctuation of film thickness. All of this makes it extremely difficult to predict when a bubble will burst,” Rio said.

Dhananjay Khadilkar is a journalist based in Paris.