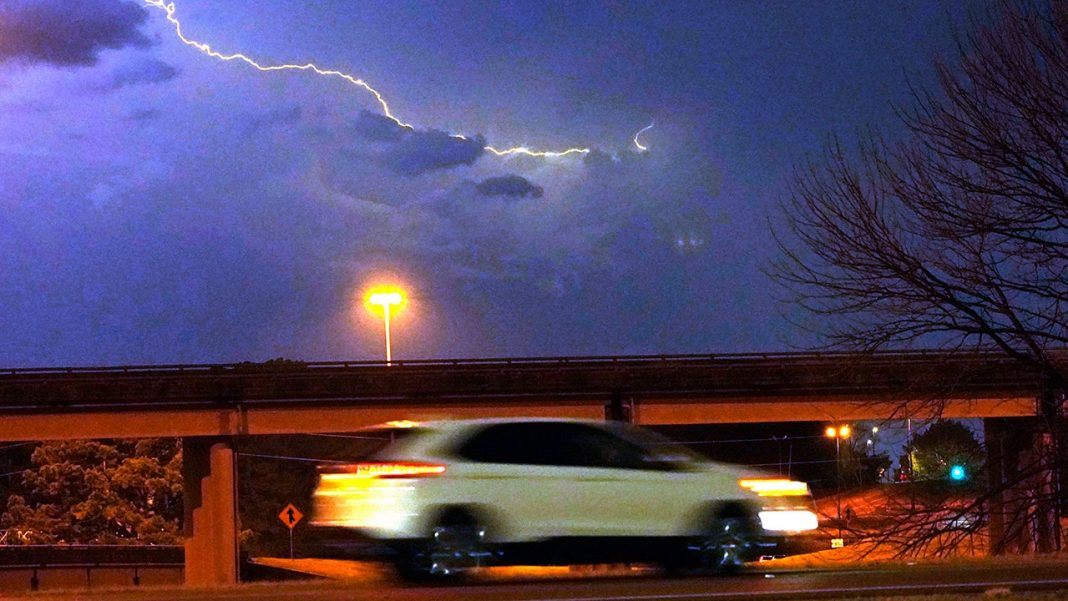 Trees fell on homes, roofs were damaged and power lines knocked down as tornadoes and severe weather ripped across parts of the south Tuesday and into Wednesday morning.

H​ere’s a look at the latest news.

T​he Weather Channel has confirmed two deaths after a tornado struck the Flatwood community of Montgomery County, Alabama, via emergency management director Christina Thornton. No other details were immediately available.

Downed power lines forced the closing of the U.S. Highway 231 bride on the Elmore/Montgomery county line. Trees are down on houses and debris is blocking roads.

The Emergency Management Agency in Montgomery County, Alabama, reports people have been injured in the Dunn Lane/Williams Drive area, according to the Alabama News Network. Homes and manufactured housing has been damaged.

W​PMI is reporting a tornado damaged the high school in Fruitdale, Alabama, about 50 miles northwest of Mobile.

U​.S. Highway 45 has been closed in Fruitdale because of debris on the road.

S​ignificant damage has been reported in Louisiana’s Caldwell Parish.

Two people were injured, according to KNOE.

F​ollowing are our updates from yesterday and last night.

R​eports of tornadoes, wind and hail stretch from Texas to Kentucky.

D​amage reports include roofs, like this one on Main Street in Sumiton, Alabama, as well as downed power lines and fallen trees.

T​here are currently no reports of major injuries.

“We’ve had a lot of damage to homes,” H. Dillion Cates, chief of fire and police in Weir, Mississippi, told The Weather Channel. “We had a camper that was actually flipped over on the roof. There was a motor vehicle accident caused by the storm.”

The damage included a roof that was lifted off a home, rotated and dropped back down.

“Thankfully we haven’t had any injuries,” Cates said.

A​ 911 dispatcher in Caldwell Parish, Louisiana, confirmed that trees are down on houses there and calls for assistance are coming in after a tornado there at around 6:19 p.m. local time.

“Likely a destructive tornado on the ground now in southeast Caldwell Parish,” the National Weather Service tweeted. “Take cover now if you are in the tornado warning!”

A​ follow up post said the area was in the clear but damage was being reported in parts of the parish, which is about 100 miles southeast of Shreveport.

“It got real dark. I said, ‘Oh my god,’ and it just got dark,” Randall Mickell, who shot video of a tornado in Bassfield, Mississippi, said in a phone interview earlier this evening.

“It started drifting down and it just went straight through. You know how they say ‘peace in a storm.’ When it was going by it was real quiet, but after the tornado itself went by the hail and the wind and the rain came.”

M​ickell and several family members, who here hunkered down in a bathtub, weren’t injured and their home escaped damage.

B​assfield is in Jefferson Davis County, about 60 miles southeast of Jackson

S​ome have several locations. A full list can be found on the Mississippi Emergency Management Agency’s website.

Hail has been reported in parts of Louisiana, Mississippi and Alabama, according to NOAA’s Storm Prediction Center.

T​here are confirmed or reported tornadoes in parts of Mississippi, including in Attala and Lawrence counties.

S​everal trees have been downed due to high winds in Prentiss County, Mississippi.

Fall usually conjures up visions of the first cold fronts of the season sweeping away summer’s heat and humidity. Crisp, cool fall mornings don’t seem to mesh with thoughts of severe thunderstorms.

Data from the past 20 years analyzed by weather.com meteorologists tells a different story.

Y​es, there’s a pronounced peak in spring and early summer. But, while fewer than spring, tornado counts remain rather steady in fall and winter.

A​ photo from Prentiss County, in northeast Mississippi, showed minor damage to at least one building after storms moved through the area.

(​5:07 p.m. ET) Nighttime Tornadoes More Than Twice As Likely To Be Deadly

Perhaps the only thing more frightening than a tornado is one that strikes while you’re asleep, weather.com senior meteorologist Jon Erdman wrote in a recent article.

Tornadoes at night are more than twice as likely to be deadly as those during the day, according to a study cited by Erdman.

Nocturnal tornadoes only make up about 27% of all tornadoes but are responsible for 39% of tornado deaths and 42% of killer tornadoes in that 55-year period.

N​OAA’s Storm Prediction Center has issued a high-end version of a tornado watch for parts of Louisiana, Mississippi and southeast Arkansas until 7 p.m. CT. This watch includes Jackson, Mississippi, and Monroe, Louisiana.

In this watch, the SPC said “this is a particularly dangerous situation,” a phrase reserved for scenarios when forecasters are highly confident that “multiple strong (EF2, EF3) or violent (EF4 or EF5) tornadoes will occur in the watch area,” according to a study.

T​he MSU campus, located adjacent to Starkville in central Mississippi, is canceling in-person teaching for the remainder of the day and evening.

“MSU’s Starkville campus will move to remote operations today at 4 p.m. with all classes moving to a remote instruction format due to an abundance of caution over predicted regional severe weather,” a post on the college’s Twitter feed said. “Stay safe, Bulldogs!”