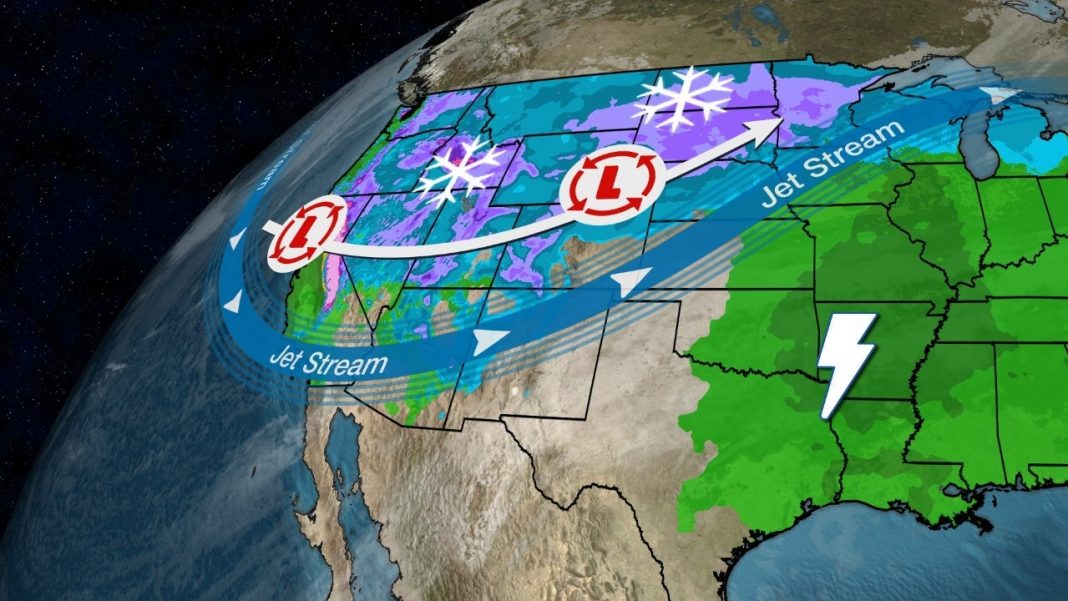 A significant storm is brewing for this weekend and next week that will produce heavy snow and strong winds in the West, Northern Plains and upper Midwest, as well as severe thunderstorms in the South.

T​he instigator for this widespread storm is a disturbance that will push into the West Coast through a sharp, southward plunge of the jet stream this weekend. From there, it will track across the Rockies and into the central U.S. by Monday and Tuesday, where it will tap increasing moisture from the Gulf of Mexico.

The result of this setup is a two-sided storm that’s likely to produce winter storm conditions in the West, Northern Plains and upper Midwest, and severe weather in the South.

H​ere’s a brief overview of what to expect from both sides of the storm. Check back to weather.com in the coming days as we provide further details once the forecast comes more into focus.

W​intry And Windy Side Of The Storm

A​n initial system will spread rain and mountain snow along the West Coast on Thursday, but the bigger storm arrives beginning Friday.

Much of this system will be in the West through this weekend, spreading gradually from Washington, Oregon and California into the Rockies. Heavy snow is likely to impact travel in the Cascades, California’s Sierra Nevada and interior parts of the West.

S​oaking rain and gusty winds will spread from coastal Washington and Oregon southward throughout much of California, including the Los Angeles and San Diego areas.

Snow and strong winds will develop in the Northern Plains and upper Midwest by later Monday and especially Tuesday, possibly lasting into midweek in some areas.

This could significantly impact travel from parts of Montana and Wyoming into western Nebraska, the Dakotas and portions of the Minnesota. Blizzard conditions are possible in some locations.

(M​APS: Track The System Each Day)

S​evere Weather Threat In The South

Thunderstorms in the South could produce tornadoes, wind damage, hail and flash flooding once this storm taps into increasing Gulf of Mexico moisture by late Monday and Tuesday.

I​t’s too early to know the magnitude of those threats, but below is a general outlook where there’s the highest confidence of at least some severe weather Monday into Tuesday, according to NOAA’s Storm Prediction Center.

-M​onday (especially Monday night): northern Texas and the eastern half of Oklahoma into western Arkansas and far southwest Missouri.

-T​uesday-Tuesday night: eastern Texas and southeast Oklahoma into much of the lower Mississippi Valley.

K​eep in mind the location of these threat areas could shift in the coming days once the exact timing of the storm becomes more certain.