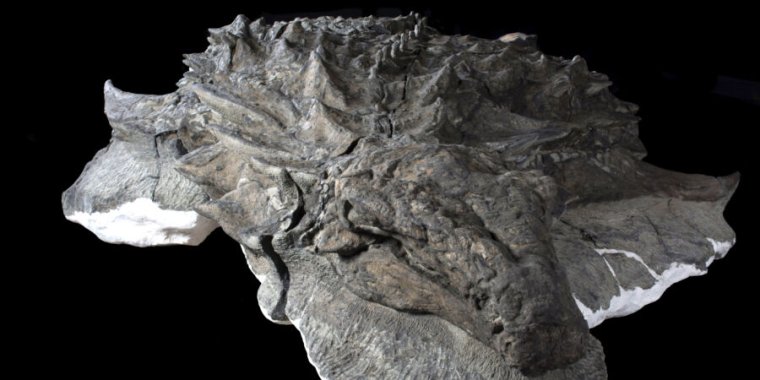 Borealopelta mitchelli found its way back into the sunlight in 2017, millions of years after it had died. This armored dinosaur is so magnificently preserved that we can see what it looked like in life. Almost the entire animal—the skin, the armor that coats its skin, the spikes along its side, most of its body and feet, even its face—survived fossilization. It is, according to Dr. Donald Henderson, curator of dinosaurs at the Royal Tyrrell Museum, a one-in-a-billion find.

Beyond its remarkable preservation, this dinosaur is an important key to understanding aspects of Early Cretaceous ecology, and it shows how this species may have lived within its environment. Since its remains were discovered, scientists have studied its anatomy, its armor, and even what it ate in its last days, uncovering new and unexpected insight into an animal that went extinct approximately 100 million years ago.

Down by the sea

Borealopelta is a nodosaur, a type of four-legged ankylosaur with a straight tail rather than a tail club. Its finding in 2011 in an ancient marine environment was a surprise, as the animal was terrestrial.

A land-based megaherbivore preserved in an ancient seabed is not as uncommon as one might think. A number of other ankylosaurs have been preserved in this manner, albeit not as well as Borealopelta. Scientists suspect its carcass may have been carried from a river to the sea in a flooding event; it may have bobbed at the surface upside-down for a few days before sinking into the ocean depths.

It would have been kept at the surface by what’s referred to as “bloat-and-float,” as the buildup of postmortem gasses would keep it buoyant. Modeling done by Henderson indicates its heavy armor would have rolled it onto its back, a position he suspects may have prevented ocean predators from scavenging its carcass.

Once the gasses that kept it floating were expelled, Borealopelta sank to the ocean floor, landing on its back.

He also told Ars that this environment probably also discouraged scavenging, saying, “It was probably a region where [long-necked] plesiosaurs and big fish didn’t like to go. It was too cold and too dark, and [there was] nothing to eat. And there were very few trace fossils in the sediments around it. So there wasn’t much in the way of worms and crustaceans and bivalves and things in there to further digest it. It was just a nice set of conditions in the seabed that had very low biological activity that led to that preservation.”

But none of this was known when the animal was discovered. Although it’s not entirely unusual to find dinosaur remains in marine environments, it’s also not very common. Henderson and Darren Tanke, also from the Royal Tyrrell Museum, walked onto the site fully anticipating that they would excavate an ancient marine reptile.

The two had consulted on fossil discoveries at other open-pit mines within the province. However, this was their first visit to Suncor, a mine in the northeast of Alberta, Canada. Everything about this mine is enormous. Massive machinery is constantly in motion, scooping out rock, sand, and gravel from surrounding cliffs, while other equipment clears it away, all with the goal of uncovering the deeper oil sands for fuel.

Despite the pace of operations, one particular shovel operator, Shawn Funk, happened to notice something after taking a big chunk out of the cliff. It was thanks to him and several people within Suncor that operations stopped in that area and the Royal Tyrrell was notified.