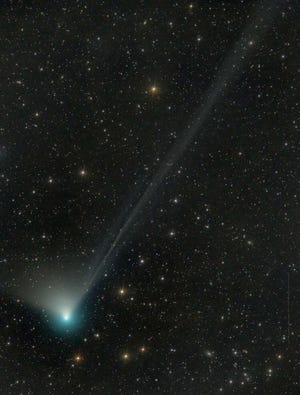 Stargazers in the High Desert will have the opportunity to view a comet that is making its first appearance in nearly 50,000 years.

Dubbed “C/2022 E3 (ZTF),” the comet made its closest approach to the sun last week and will appear in our sky between Feb. 1 and Feb. 2, when it makes its closest pass of Earth, NASA officials said.

As the comet nears Earth, observers will be able to spot it in the late night or pre-dawn hours near the bright star Polaris, also called the North Star. The icy comet, which has steadily brightened as it approached the sun, will be seen as it passed nearly 26 million miles away.

The comet, commonly called the “green comet” by many, won’t be as bright as other famous comets such as Halley’s or Hale-Bopp.

How to see the comet

The comet should be visible through binoculars in the morning sky by stargazers in the Northern Hemisphere and during most of January. Those in the Southern Hemisphere can view the comet in early February, according to NASA.

Depending on how bright it becomes in the coming weeks, the comet may even become visible to the unaided eye in dark skies toward the end of January.

Victorville resident Charlie Ramos, 67, and his family plan to take a few binoculars and their Celestron telescope out to a remote part of the High Desert to view the comet.

“We found that the best place to view stars and comets is between Lucerne Valley and Barstow,” Ramos told the Daily Press. “There’s hardly any light pollution out there.”

Comets can be distinguished from stars by their streaking tails of dust and energized particles, as well as the glowing green coma surrounding them.

The coma is an envelope that forms around a comet as it passes close to the sun, causing its ice to sublimate, or turn directly to gas. This causes the comet to look fuzzy when observed through telescopes.

The comet was discovered on March 2, by astronomers using the Zwicky Transient Facility’s wide-field survey camera located at the Palomar Observatory in San Diego County.

The comet’s orbit around the sun passes through the outer reaches of the solar system, which is why it’s taken such a long time to swing by Earth again, according to The Planetary Society.

Once in a lifetime passing

The future of the comet’s journey after it passes through the inner solar system remains unknown. But, don’t expect to see C/2022 E3 (ZTF) from Earth’s skies again in your lifetime.

“We don’t have an estimate for the furthest it will get from the Earth yet – estimates vary – but if it does return it won’t be for at least 50,000 years,” Jessica Lee, an astronomer at Royal Observatory Greenwich, told Newsweek.

She added that “some predictions suggest that the orbit of this comet is so eccentric it’s no longer in an orbit,” meaning that C/2022 E3 (ZTF) may never return. January and February may also mark the only time in recorded history that humans will be able to see C/2022 E3 (ZTF) from Earth.

Daily Press reporter Rene Ray De La Cruz may be reached at 760-951-6227 or RDeLaCruz@VVDailyPress.com. Follow him on Twitter @DP_ReneDeLaCruz