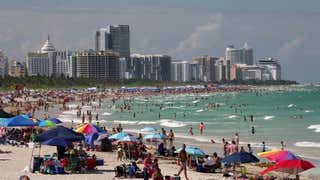 It’s that time of year when water sports and beach activities are in full swing, and cases of what’s known as “flesh-eating bacteria” start to peak.

“There’s very few people that get sick and die in the United States, but when somebody dies it makes the news because it’s so graphic, and that’s because you die within a day or two,” Paul Gulig, a professor of molecular genetics and microbiology at the University of Florida School of Medicine, told weather.com in an interview Friday.

The bacteria can cause necrotizing fasciitis, which kills skin around a wound and can rapidly make some people very ill. People typically come into contact with it in one of two ways – through an open wound exposed to water where Vibrio vulnificus lives or by eating contaminated shellfish such as oysters.

There are several types of Vibrio bacteria that can cause different kinds of infections. The Centers for Disease Control and Prevention says about 100 people die each year in the U.S. from all types of Vibrio infections combined.

Those with pre-existing conditions including liver disease, cancer and HIV, are more susceptible, according to the CDC. Receiving immune-suppressing therapy for the treatment of disease, taking medicine to decrease stomach acid levels or having recent stomach surgery also make people more vulnerable to infection.

As far as Vibrio vulnificus specifically, the CDC says about one in five people who are infected will die, and many need surgery or amputations.

The most recent annual data posted on the CDC website is from 2014. It indicates that 124 people were infected with Vibrio vulnificus nationwide that year and 21 died. By contrast, 82 people were killed in rip currents at U.S. beaches in 2014, according to the National Weather Service, making that a bigger overall threat.

State-by-state infection numbers are also hard to come by, but Florida keeps a database of Vibrio vulnificus infections. The state has recorded 13 cases and five deaths so far this year. Thirty-six cases and seven deaths were reported in 2020, with 27 cases and two deaths in 2019.

Be Prepared With This Health and Safety Gear (SPONSORED)

Texas saw an average of 21 cases each year from 2011 to 2015, according to the most recent data posted on its state health department website.

Since Vibrio vulnificus lives in brackish water, it can affect beachgoers, fishermen and boaters. And because it likes warm water, it’s more prevalent in Gulf Coast states and most infections occur between May and October.

But the bacteria are showing up in new places, and many scientists say that’s because of climate change.

“The frequency of infections are moving north as the waters get warmer,” Gulig, who spent several years studying Vibrio vulnificus, said.

Gulig also said the bacteria can also be affected by rainfall. Increased summer rain can cause lower salinity levels in some bays and other bodies of water, making it more hospitable to Vibrio vulnificus.

“You don’t tend to find it out in the open ocean because it is cooler and saltier,” he said.

Gulig points out that one reason the bacteria is so deadly is that it is so aggressive.

“It just invades through our tissues like crazy. The wildfires out West are spreading like crazy – think of this bug being a wildfire in your body. That’s how it kills you,” he said.

“The infection shows up within hours or definitely within a day, but then you can be dead on the second day.”

(MORE: Future Tropical Weather Could Break Up Red Tide in Tampa Bay – or Make It Worse)

Gulig also points out that it takes a series of events for a person to become infected, let alone contract a fatal case.

“If it’s detected quickly it’s treatable with antibiotics,” he said.

For that reason, anyone who suspects they might be infected should seek immediate medical treatment. Symptoms of necrotizing fasciitis according to the CDC include a red, warm, or swollen area of skin that spreads quickly; severe pain, including pain beyond the area of the skin that is red, warm, or swollen; fever.

To avoid infection, the CDC recommends avoiding raw or undercooked shellfish and keeping open wounds – including from recent surgery, tattoo or piercing – away from saltwater, brackish water, raw seafood and raw seafood juices.

The Weather Company’s primary journalistic mission is to report on breaking weather news, the environment and the importance of science to our lives. This story does not necessarily represent the position of our parent company, IBM

Monsoon Fury in Bihar: Thunderstorms Claim 16 Lives in the State; Red Warning Issued for June 29 | The Weather Channel – Articles from...

Uttarakhand and Himachal Pradesh on Alert As Monsoon Arrives With a Bang! Very Heavy Rains Forecast for June 29-30 | The Weather Channel –...