The world’s thinnest magnet — which is just one atom thick — has been created by scientists and could lead to huge advances in computing and quantum physics.

This design is the brainchild of experts from the Lawrence Berkeley National Laboratory and the neighbouring University of California, Berkeley.

Made using a technique that the team say will be easily scalable, it features a single atomic layer of zinc oxide, dotted within which are the occasional cobalt atoms.

It uses a different underlying mechanism to other attempts to make 2D magnets, with the free electrons in the zinc oxide preserving the magnetism of the cobalt.

The thickness of the magnet is around a millionth of that of a sheet of paper — and it is also flexible and able to operate at ambient temperatures, unlike many of its peers.

Given this, the design could find application in so-called spintronic data storage, in which information is encoded using an electron’s spin, rather than charge.

The world’s thinnest magnet — which is just one atom thick — has been created by scientists and could lead to huge advances in computing and quantum physics. Pictured: the magnet is made by cooking a solution of cobalt, graphene oxide and zinc — producing layers of cobalt-bearing zinc oxide sandwiched between layers of graphene, as depicted

The world’s thinnest magnet comprises a single atomic layer of zinc oxide dotted within which are the occasional cobalt atoms.

It was produced by baking a solution of cobalt, graphene oxide and zinc in a conventional lab oven for a few hours.

This produced sheets of zinc oxide (with cobalt), sandwiched between layers of graphene.

Finally, the graphene is burnt away to expose the single-layer magnet.

‘There are no major obstacles for industry to adopt our solution-based method, noted Professor Yao.

The team confirmed that the magnet was just one layer of atoms thick by analysing it with both scanning and transmission electron microscopy.

And they used x-ray analysis to prove that the material was indeed magnetic not only under ambient conditions — but also at temperatures as high as 212°F (100°C).

The team found that the system becomes weakly magnetic with around a 5–6 per cent concentration of cobalt atoms — but a very strong magnet forms at around 12 per cent.

But when the cobalt concentration exceeded 15 per cent, the team were surprised to find that the magnet shifts in an exotic quantum state of ‘frustration’, in which different magnetic domains in the system work against each other.

‘We think this unique mechanism is due to the free electrons in zinc oxide.’

The study was conducted by material scientist Jie Yao of the Lawrence Berkeley National Laboratory and colleagues.

‘We’re the first to make a room-temperature 2D magnet that is chemically stable under ambient conditions,’ said Professor Yao.

His colleague Rui Chen added that the discovery was also exciting because it ‘uncovers a new mechanism to realize 2D magnetic materials.’

Memory devices today often make use of relatively thin magnetic films — but, when considered on the atomic scale, these are still three-dimensional, with thicknesses in the order of hundreds to thousands of atoms.

Thinner and smaller magnets that approach two-dimensionality are appealing to researchers, as they have the potential to store data at much higher densities — meaning less space would be needed to hold a given volume of information.

However, while explorations of two-dimensional magnetic materials to date have shown promise, such magnets tend to work on in select conditions, and become chemically unstable and non-functional at close to room temperature.

‘Theoretically, we know that the smaller the magnet, the larger the disc’s potential data density,’ he added.

‘Our 2D magnet is not only the first that operates at room temperature or higher, but it is also the first magnet to reach the true 2D limit — it is as thin as a single atom!’

According to the team, their new magnet design will also pave the way for new ways to study quantum physics.

‘It opens up every single atom for examination, which may reveal how quantum physics governs each single magnetic atom and the interactions between them.’

‘With a conventional bulk magnet where most of the magnetic atoms are deeply buried inside the material, such studies would be quite challenging to do.’

According to Mr Chen, the mechanism underlying the magnetism in their material — which they call a ‘cobalt-doped van der Waals zinc-oxide magnet’ is distinct to that employed by previous efforts to create a 2D magnet.

The difference, he believes, lies in how free electrons from the (nonmagnetic )zinc oxide are able to act as an intermediary, ensuring that the cobalt atoms in the atomic layer point in the right direction — thereby allowing them to stay magnetic.

‘Free electrons are constituents of electric currents. They move in the same direction to conduct electricity,’ explained Professor Yao, who compares the movement of the electrons in metals or semiconductors to the flow of molecules in a stream of water. 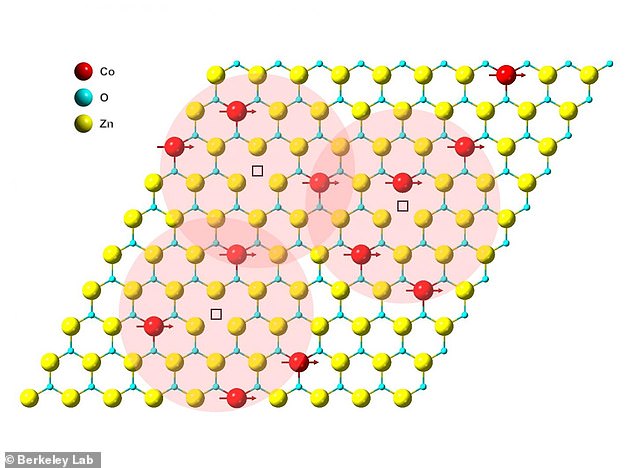 The world’s thinnest magnet comprises a single atomic layer of zinc oxide dotted within which are the occasional cobalt atoms. It was produced by baking a solution of cobalt, graphene oxide and zinc in a conventional lab oven for a few hours. This produced sheets of zinc oxide (shown in yellow and blue, with cobalt in red) sandwiched between layers of graphene. Finally, the graphene is burnt away to expose the single-layer magnet

‘I believe that the discovery of this new, robust, truly two-dimensional magnet at room temperature is a genuine breakthrough,’ said paper author and physicist Robert Birgeneau of the University of California, Berkeley.

‘In addition to its obvious significance to spintronic devices, this 2D magnet is fascinating at the atomic level, revealing for the first time how cobalt magnetic atoms interact over ‘long’ distances” through a complex two-dimensional network.’

‘Our results are even better than what we expected, which is really exciting. Most of the time in science, experiments can be very challenging. But when you finally realize something new, it’s always very fulfilling,’ he concluded.

The full findings of the study were published in the journal Nature Communications.

WHAT IS A MAGNETIC FIELD AND HOW IS IT CREATED?

A magnet is any object that has a magnetic field. It attracts ferrous objects like pieces of iron, steel, nickel and cobalt.

These days magnets are made artificially in various shapes and sizes depending on their use.

One of the most common magnets – the bar magnet – is a long, rectangular bar of uniform cross-section that attracts pieces of ferrous objects

A magnetic field is the space surrounding a magnet, in which magnetic force is exerted.

If a bar magnet is placed in such a field, it will experience magnetic forces.

However, the field will continue to exist even if the magnet is removed. The direction of magnetic field at a point is the direction of the resultant force acting on a hypothetical North Pole placed at that point.

When current flows in a wire, a magnetic field is created around the wire.

Accurate New Map of All the Matter in the Universe Released

Scientist Accidentally Discovers The Oldest Brain of Any Vertebrate : ScienceAlert