US markets had a volatile session on Monday, with the three major indices erasing as much as 4% intraday losses and closed mildly higher. This may be attributed to dip-buying activity as market participants took the recent selloff as an opportunity to accumulate stocks. Consumer discretionary (+1.21%), energy (+0.55%) and industrials (+0.52%) were among the top performing sectors, whereas defensive-linked utilities (-1.03%), healthcare (-0.37%) and consumer staples (-0.35%) trailed behind.

The price of Bitcoin at one point fell to $32,950 – the lowest level seen since end July – before paring losses. The cryptocurrency has lost almost half of its value since early November, probably because of an imminent rate-hike cycle that points to less liquidity in the market down the road, as well as weakness in technology shares.

Overall sentiment remains fragile though, as investors scrutinize Wednesday’s FOMC meeting for clues about the Fed’s timeline for tapering. The market has now fully priced in a March rate hike and three more by the end of 2022. The question remains on when the Fed will start to shrink its $8.8 trillion balance sheet and at what pace it will be conducted. It has more than doubled from pre-pandemic levels, allowing the central bank to reduce its asset at a faster pace compared to the prior cycle during 2017-2019.

Asia-Pacific markets look set to trade on the back foot following a wild swing in the US market. Futures in Japan, Australia, Hong Kong, South Korea, Taiwan, Singapore, Malaysia, India, Thailand and Indonesia are in the red, whereas those in mainland China are in the green.

Hong Kong’s Hang Seng Index (HSI) may exhibit resilience against selling, as policy divergence between the Fed and the PBoC may provide some support to Chinese stocks. Authorities have also recently shown a willingness to ease curbs on the property sector, bringing hopes that policymakers will also relax rules on the technology sector to cushion a slowing economy. Exchange data showed that HKD 2.67 billion have flowed into the Hong Kong market on Monday via stock connections, marking a 14th consecutive session of net inflow (chart below). 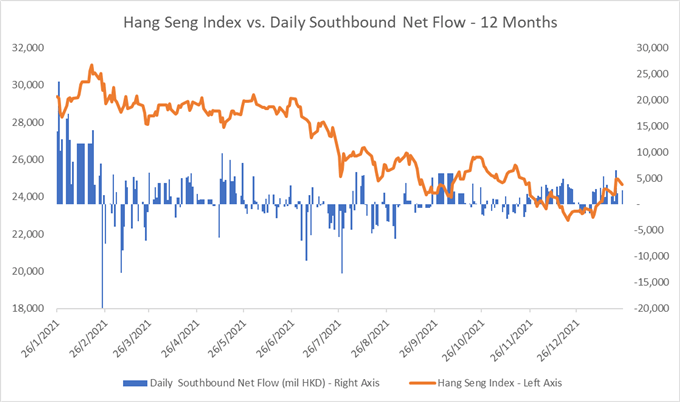 The Nasdaq 100 index experienced a large intraday swing overnight, breaching several support levels before reversing losses. This formed a “Hammer” candlestick pattern that may signal a bullish trend reversal. An immediate support level can be found at around 14,180 – the 61.8% Fibonacci extension. Failing to hold above this level would bring the next support level of 13,960 into focus. The MACD indicator is trending lower, suggesting that downward momentum may be prevailing. 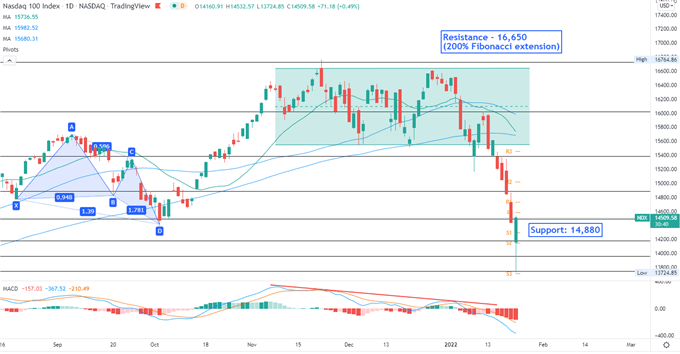 The Hang Seng Index (HSI) breached above a “Falling Wedge” pattern from the upside, opening the door for further gains. An immediate resistance level can be found at around 24,900 – the 127.2% Fibonacci extension. Breaching above this level may expose the next resistance level of 25,600. The MACD indicator pierced through the neutral midpoint and trended higher, suggesting that bullish momentum may be building. 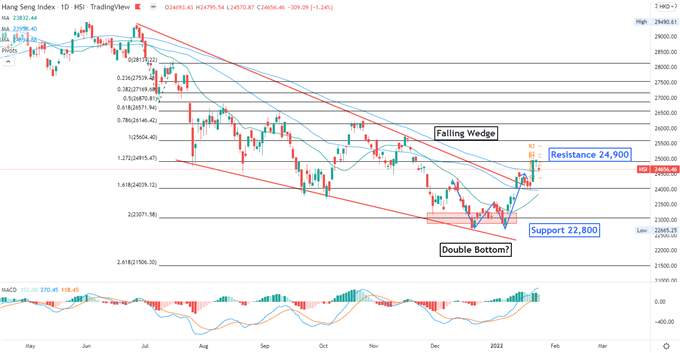 The ASX 200 index breached below a range-bound zone between 7,200 to 7,500 as highlighted on the chart below. This has opened the door for further losses with an eye on 7,080 for support. The overall trend has now become bearish -biased after the formation of a long bearish candlestick on Friday. The MACD indicator formed a bearish crossover and trended lower, underscoring bearish momentum. 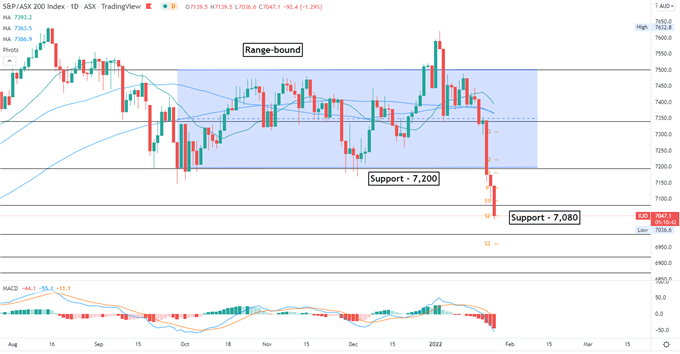 Pfizer’s Setbacks With Paxlovid Are Mounting — Should Investors Be Concerned?