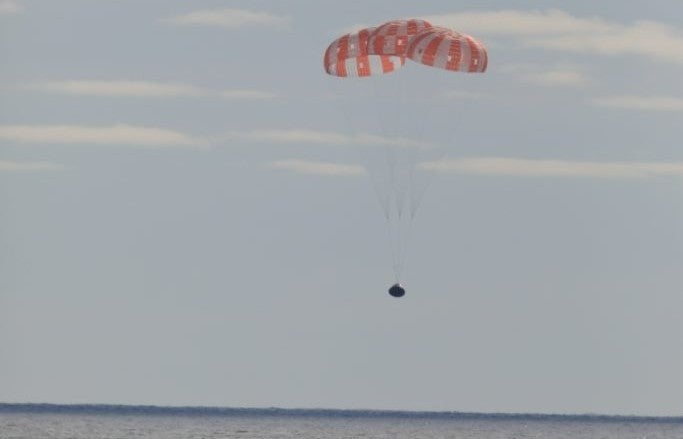 After travelling 1.4 million miles through space, NASA’s Orion spacecraft has landed on the Earth, the final major milestone of the Artemis I mission.

The Orion spacecraft completed a parachute-assisted splashdown in the Pacific Ocean, the space agency said in a blog post on Sunday.

Before powering down Orion and handing it over to the USS Portland’s recovery team, engineers will run several additional tests while the spacecraft is in the water.

Navy divers and other team members will approach the spacecraft in several inflatable boats under the direction of the NASA recovery director.

The divers will attach a cable known as the winch line when Orion is prepared to be pulled into the ship’s ‘well deck’ at the waterline. They will also attach up to four more tending lines to attach points on the crew module.

When the spacecraft is on board, crews will transport it to the US Naval Base San Diego before returning it to NASA’s Kennedy Space Center for examination.

Orion will be thoroughly inspected by technicians in Florida, who will also retrieve all recorded data and remove any payloads that are still on board.

“Through Artemis missions, NASA will establish a long-term lunar presence for scientific discovery and prepare for human missions to Mars,” the space agency said.

Earlier this month, it was reported that after a historic flyby just 128 km from the surface of the Moon, NASA’s Orion spacecraft was on course for its return to the Earth on December 11.