NASA‘s James Webb Space Telescope (JWST) has captured the ‘once-hidden’ beginnings of a very young star during its exploration to find the first galaxies.

The image of this never-before-seen protostar shows an ‘hourglass’ shape that looks like it is on fire in the middle of the blackness of space, which is only visible in infrared light.

JWST is the only telescope ever to have this ability.

Using its Infrared Camera (NIRCam), Webb was not only able to penetrate the dark cloud that has shrouded protostars from telescopes in the past, but also look back in time to see the when the young star is feeding on a cloud of material to increase in size.

NASA shared the astounding image Wednesday, while noting this view of the protostar, dubbed L1527,  ‘provides a window into what our sun and solar system looked like in their infancy.’

The image of this protostar shows an ‘hourglass’ shape that looks like it is on fire in the middle of the blackness of space, which is only visible in infrared light. The image, which looks like an explosion in space, shows the once invisible dust and clouds surrounding the region and in the center of the hourglass is the young star that is just 100,000 years old

How does James Webb see back in time?

The further away an object is, the further back in time we are looking.

This is because of the time it takes light to travel from the object to us.

With James Webb’s larger mirror, it will be able to see almost the whole way back to the beginning of the universe, more than 13.5 billion years ago.

With its ability to view the Universe in longer wavelength infrared light, James Webb will be capable of seeing some of the most distant galaxies in our universe, certainly with more ease than than the visible/ultraviolet light view of Hubble.

This is because light from distant objects is stretched out by the expansion of our universe – an effect known as redshift – pushing the light out of the visible range and into infrared.

The NIRCam is a first-of-its-kind camera that enables JWST to detect cosmic features previous telescopes have missed.

This is because it is designed to pick up near-infrared and mid-infrared wavelengths, which is the light beyond the red end of the spectrum.

This technology is ‘key for observing the first galaxies that formed after the Big Bang and for achieving all the telescope’s science objectives,’ Alison Nordt, space science and instrumentation director for Lockheed Martin, which designed and built the technology, said in a previous statement.

The image, which looks like an explosion in space, shows the once invisible dust and clouds surrounding the region and in the center of the hourglass is the young star that is just 100,000 years old.

This is compared to the majority that range from one billion to 10 billion years old.

The most astounding features are the clouds of blue and orange that are created as material shoots away from the protostar and impacts with surrounding matter.

‘The colors themselves are due to layers of dust between Webb and the clouds,’ NASA shared in a statement.

‘The blue areas are where the dust is thinnest. The thicker the layer of dust, the less blue light is able to escape, creating pockets of orange.’

Because the protostar is so young, NASA considers it a class 0, which is the earliest stage of star formation, and this one still has a long way to go before it sheds its dark cloud of dust and gas and blossoms into a full-fledged star.

And unlike matured stars, this protostar does not yet generate its own energy through nuclear fusion yet, an essential characteristic of stars.

Its shape, while mostly spherical, is also unstable, taking the form of a small, hot, and puffy clump of gas somewhere between 20 and 40 percent the mass of Earth’s sun.

‘As the protostar continues to gather mass, its core gradually compresses and gets closer to stable nuclear fusion,’ according to NASA.

‘The scene shown in this image reveals L1527 doing just that. The surrounding molecular cloud is made up of dense dust and gas being drawn to the center, where the protostar resides. ‘

NASA continues to explain that as this material falls in, it will spiral around the center region of the hourglass shape, which creates a dense disk of material, known as an accretion disk – and this is what is feeding material to the protostar. 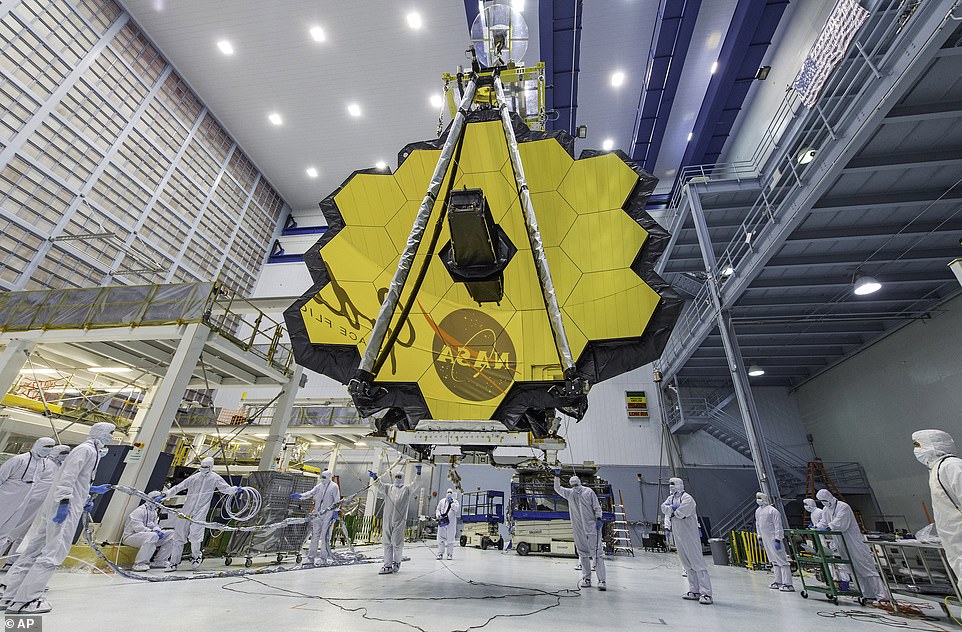 NASA’s James Webb is the only telescope capable of seeing in infrared light, allowing it to observe never-before-seen cosmic features. Here is the telescope in 2017, years before it launched last year

As it gains more mass and compresses further, the temperature of its core will rise, eventually reaching the threshold for nuclear fusion to begin and embarking on its epic journey to a full-fledged star.

JWST, which was launched from Guiana Space Centre in French Guiana on December 25 last year, will explore the universe in the infrared spectrum, allowing it to gaze through clouds of gas and dust where stars are being born.

In comparison, its predecessor Hubble has operated primarily at optical and ultraviolet wavelengths since its launch in 1990.

As the universe is expanding, light from the earliest stars shifts from the ultraviolet and visible wavelengths it was emitted in, to longer infrared wavelengths.

Astronomers will use JWST to observe the infrared universe, analyze the data collected and publish scientific papers on their discoveries.