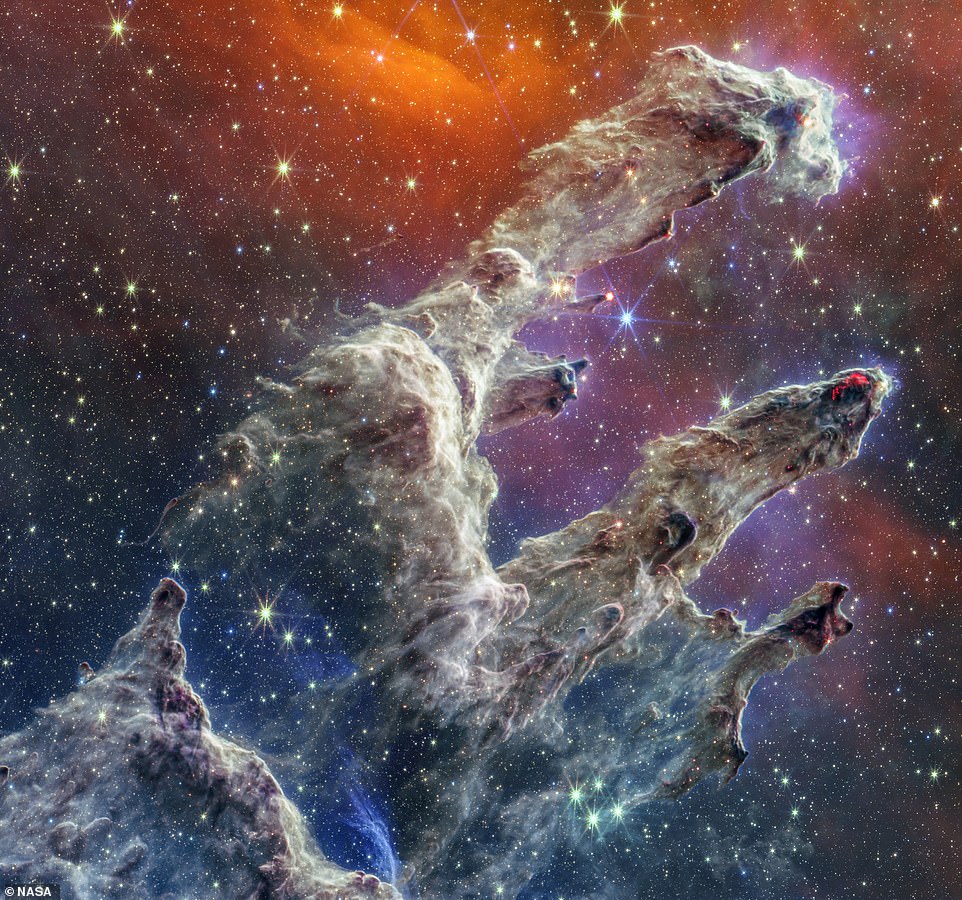 Almost 30 years ago the Pillars of Creation stunned the astronomy world when they were captured by NASA‘s famed Hubble Space Telescope.

Now a new generation can enjoy a fresh view of the haunting scene after the US space agency’s $10 billion (£7.4 billion) super space telescope James Webb imaged the same finger-like tendrils of gas and dust.

Resembling a ghostly hand, the Pillars of Creation are part of the Eagle Nebula – which is 6,500 light-years away from Earth – and are known for being a source of star formation.

This week NASA and the European Space Agency revealed another look at the pillars from the sharp eyes of Webb.

Beautiful: Almost 30 years ago the Pillars of Creation stunned the astronomy world when they were captured by NASA’s famed Hubble Space Telescope. Now a new generation can enjoy a fresh view of the haunting scene after the US space agency’s $10 billion (£7.4 billion) super space telescope James Webb imaged the same finger-like tendrils of gas and dust (pictured) 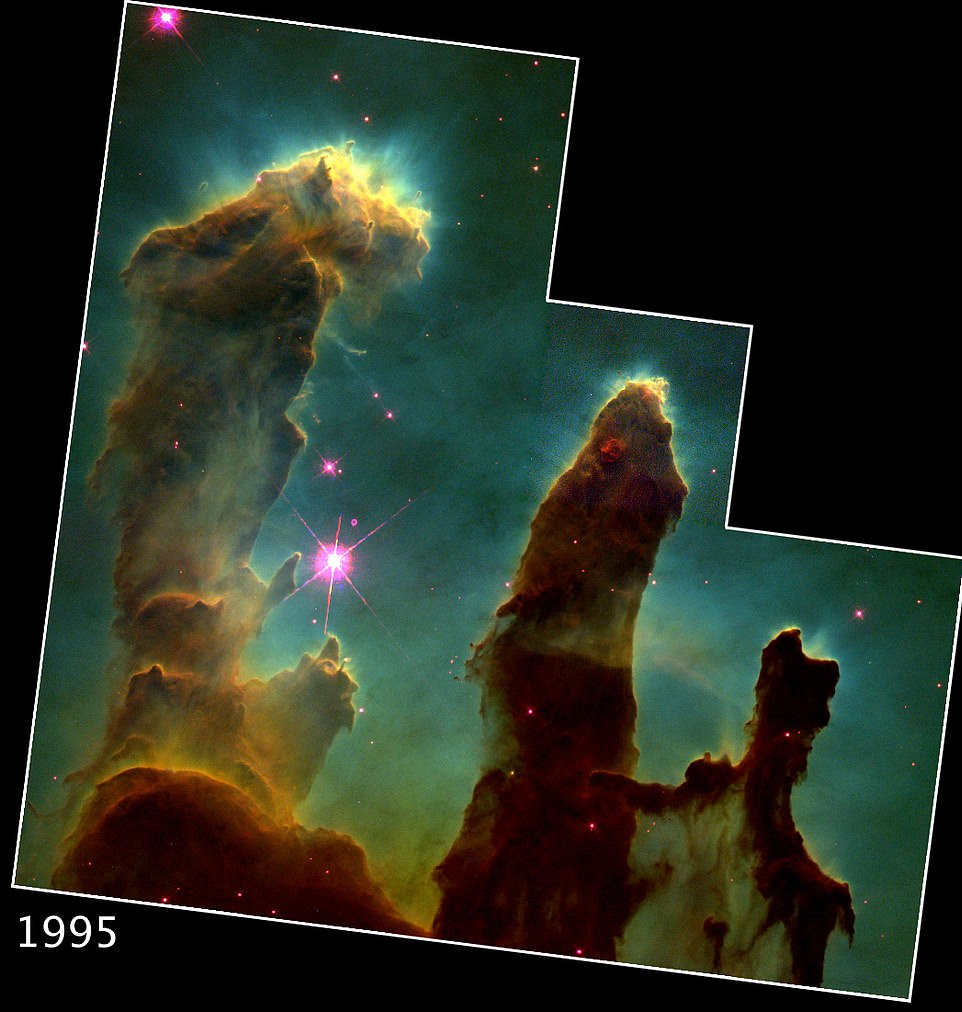 The first image of the Pillars of Creation was taken by Hubble in 1995. It provided the first evidence that stars could be birthed within the pillars

WHAT ARE THE PILLARS OF CREATION?

They are one of the most iconic space features ever to have been caught on camera.

The Pillars of Creation were first snapped by NASA’s Hubble telescope back in 1995, then re-imaged in 2014.

Now, nearly 30 years on from our first view of the haunting formation, it has been imaged again by NASA’s new super space telescope James Webb.

The Pillars of Creation, which are located 6,500 light-years away from Earth in the constellation Serpens, are part of the Eagle Nebula.

They are known for being an important source of star formation.

Gas and dust in the claw-like tendrils lead to the birth of stars, including many that are very young and some that have now been imaged that are just a few 100,000 years old.

In Hubble’s 1995 image, the blue colours represent oxygen, red is sulfur, and green both nitrogen and hydrogen.

The pillars are bathed in the scorching ultraviolet light from a cluster of young stars located just outside the frame.

The winds from these stars are slowly eroding the towers of gas and dust.

The latest image was taken in mid-infrared light, which blocks out the brightness of stars so it only captures the flowing gas and dust. This provided a new way of experiencing and understanding the stunning formation.

Webb has instruments that see in different wavelengths of infrared.

In October, experts released a Pillars of Creation image from the Near-Infrared Camera (NIRCam), before following that up with an image from its Mid-Infrared Instrument (MIRI).

They have now put the images together to produce a haunting image that features the best of both views, showcasing glowing edges of dust where young stars are beginning to form.

NIRCam reveals newly-formed stars in orange outside the pillars, while MRI showcases the layers of dust in the formation.

‘This is one of the reasons why the region is overflowing with stars – dust is a major ingredient of star formation,’ NASA said.

The glowing red fingertip on the second pillar suggests active star formation, but the stars are just babies – NASA estimates them to be only a few 100,000 years old.

They take millions of years to fully form.

‘By combining images of the iconic Pillars of Creation from two cameras aboard NASA’s James Webb Space Telescope, the universe has been framed in its infrared glory,’ the Webb team wrote.

They said it ‘set this star-forming region ablaze with new details’.

When knots of gas and dust with sufficient mass form in the pillars, they begin to collapse under their own gravitational attraction, slowly heat up, and eventually form new stars.

‘Newly-formed stars are especially apparent at the edges of the top two pillars – they are practically bursting onto the scene,’ the Webb team said.

‘Almost everything you see in this scene is local.

‘The distant universe is largely blocked from our view both by the interstellar medium, which is made up of sparse gas and dust located between the stars, and a thick dust lane in our Milky Way galaxy.

‘As a result, the stars take centre stage in Webb’s view of the Pillars of Creation.’

The Pillars of Creation are located in the constellation Serpens. 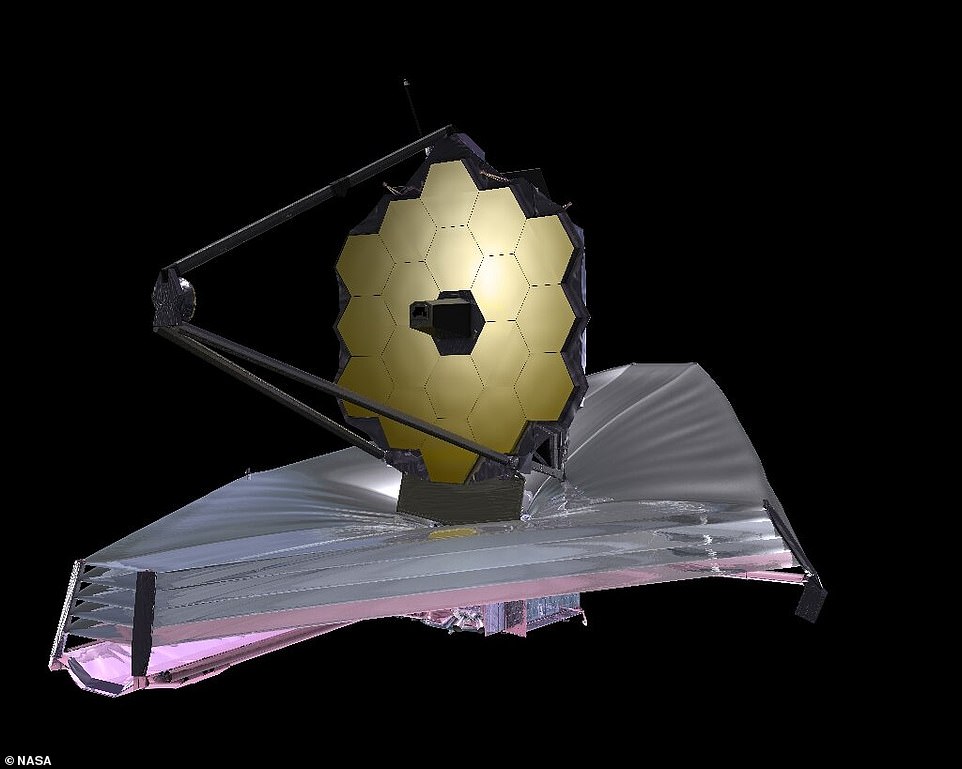 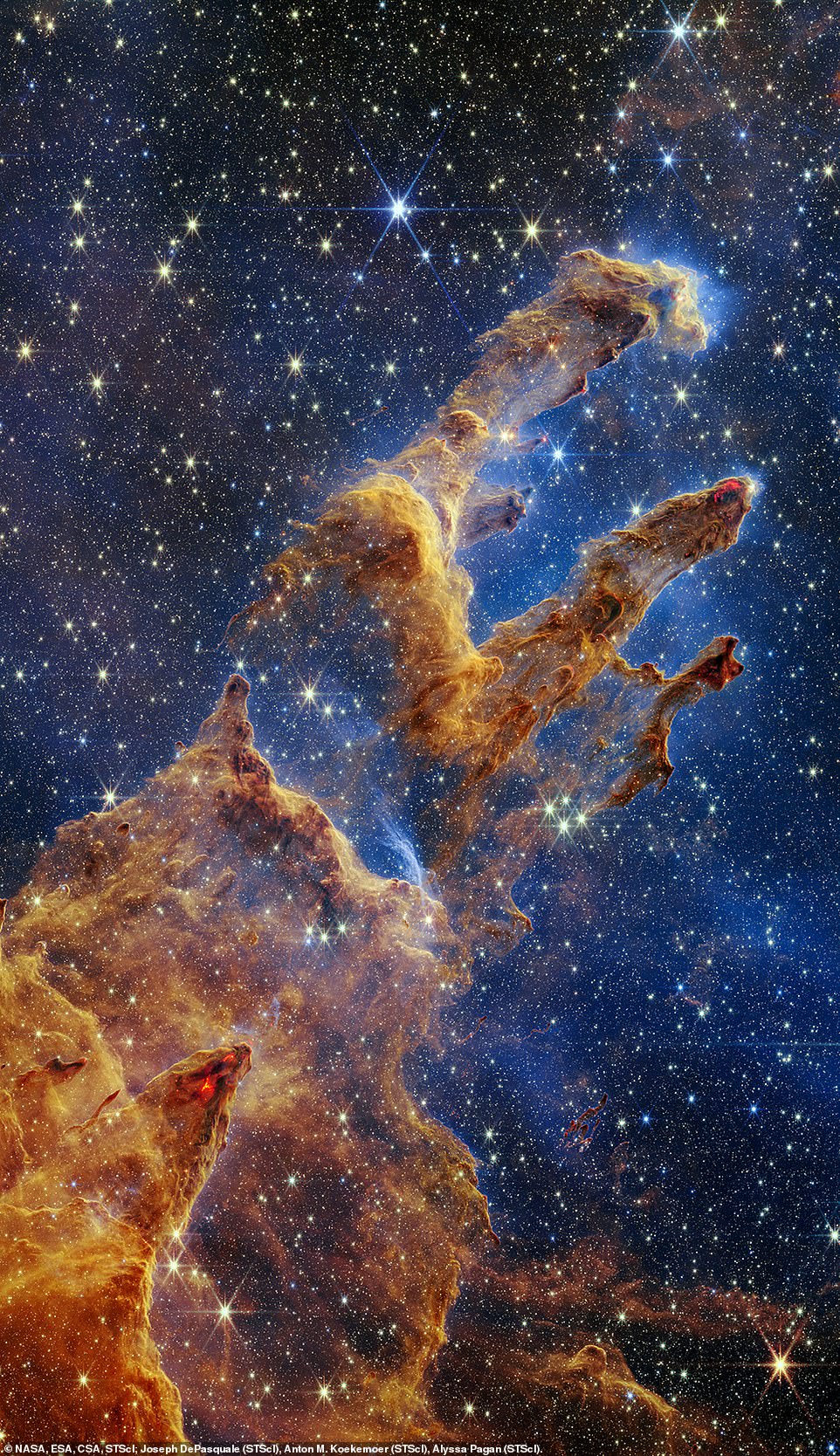 In October, experts released a Pillars of Creation image from the Near-Infrared Camera (NIRCam) 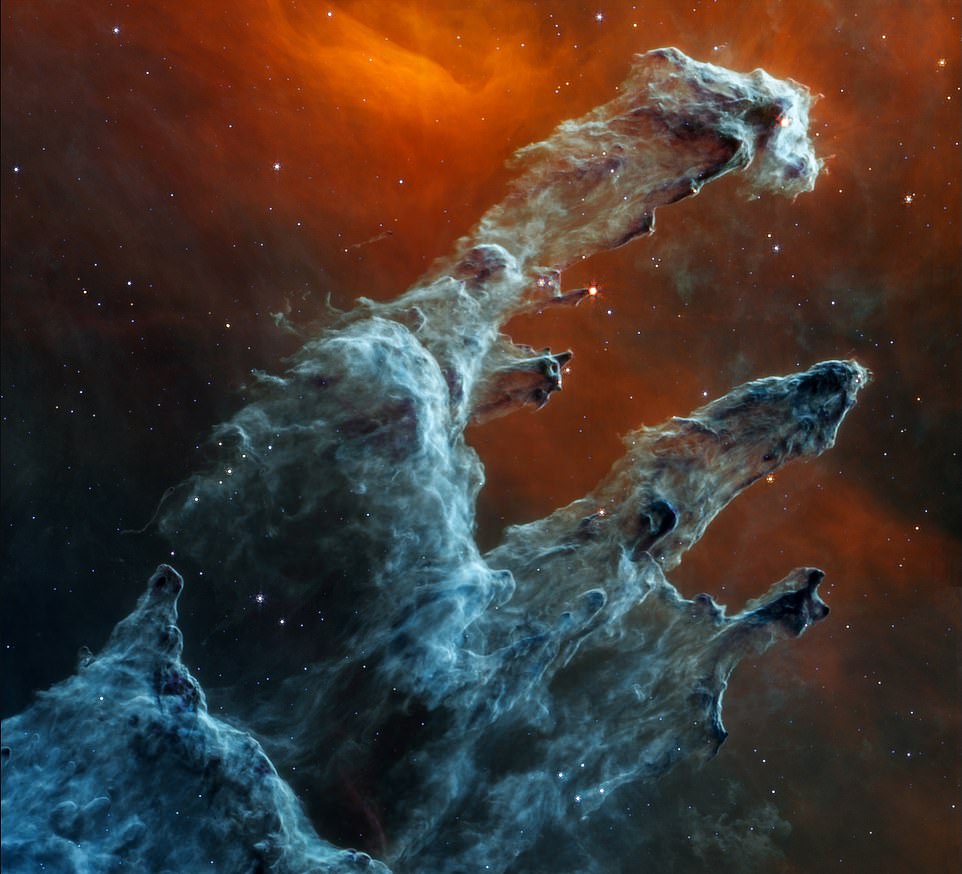 This contains a young hot star cluster, NGC6611, visible with modest back-garden telescopes, that is sculpting and illuminating the surrounding gas and dust, resulting in a huge hollowed-out cavity and pillars, each several light-years long.

The Hubble image from 1995 hinted at new stars being born within the pillars. Owing to obscuring dust, Hubble’s visible light picture was unable to see inside and prove that young stars were forming.

NASA then sent Hubble back for a second visit, allowing them to compare the two shots.

Astronomers noticed changes in a jet-like feature shooting away from one of the newborn stars within the pillars.

The jet grew 60 billion miles longer in the time between observations, suggesting material in the jet was traveling at a speed of about 450,000 miles per hour.

The James Webb Telescope: NASA’s $10 billion telescope is designed to detect light from the earliest stars and galaxies

The James Webb telescope has been described as a ‘time machine’ that could help unravel the secrets of our universe.

The telescope will be used to look back to the first galaxies born in the early universe more than 13.5 billion years ago, and observe the sources of stars, exoplanets, and even the moons and planets of our solar system.

The vast telescope, which has already cost more than $7 billion (£5 billion), is considered a successor to the orbiting Hubble Space Telescope

The James Webb Telescope and most of its instruments have an operating temperature of roughly 40 Kelvin – about minus 387 Fahrenheit (minus 233 Celsius).

It is the world’s biggest and most powerful orbital space telescope, capable of peering back 100-200 million years after the Big Bang.

The orbiting infrared observatory is designed to be about 100 times more powerful than its predecessor, the Hubble Space Telescope.

NASA likes to think of James Webb as a successor to Hubble rather than a replacement, as the two will work in tandem for a while.

The Hubble telescope was launched on April 24, 1990, via the space shuttle Discovery from Kennedy Space Centre in Florida.