All the sessions from Transform 2021 are available on-demand now. Watch now.

Facing a global semiconductor chip shortage, Intellivision has delayed the launch of its Amico retro console for a third time.

The console was most recently scheduled to debut in October, and now it will be delayed until the end of the year. But there isn’t an exact launch date, based on the company’s announcement on late Friday.

In a message to GamesBeat, CEO Tommy Tallarico said that the company will try to ship its preorders by the end of the year, but he acknowledged that the “component crisis and shipping is extremely challenging.”

The global semiconductor shortage has affected all electronics companies, and the car industry is expected to lose $100 billion in sales in 2021 because of the chip shortage, according to professional services firm KPMG.

Three top investment pros open up about what it takes to get your video game funded.

Above: Tommy Tallarico is CEO of Intellivision and a longtime game musician.

“Despite our best efforts, and now facing new unprecedented international component supply and logistics challenges beyond our control, we want to apologize as we are forced to push our desired launch date yet again,” Tallarico said in an announcement.

He said this will give the company more time to optimize its operating system for future game development. He said the company will keep all parties informed on its progress.

Tallarico had originally planned to launch the console in October 2020, before both Sony and Microsoft were due to ship their next-generation consoles. But the pandemic disrupted those plans and the Intellivision had to postpone its launch date until April 2021. Then Tallarico further delayed it to October 2021, and now it has been rescheduled again.

In the meantime, Tallarico said the company has grown to more than 60 employees and he said the games are turning out to be fun. 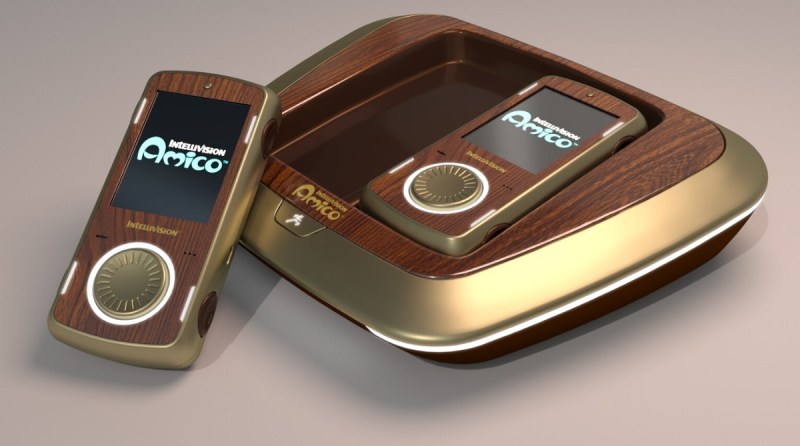 Above: Intellivision has a big funky controller that looks like it’s from the 1980s.

The original Intellivision is a game console from Mattel that gave Atari a run for its money in the early 1980s. It was more advanced than the Atari 2600, with better graphics, and it even had simple voices in some games.

Tallarico has been in the video game industry for 32 years, and he created the “oof” sound that became the signature sound for Roblox games. Tallarico, who created the Video Games Live concert series, announced in 2018 that he had acquired the rights to the console and its original games and planned to relaunch Intellivision as a retro brand.

GamesBeat’s creed when covering the game industry is “where passion meets business.” What does this mean? We want to tell you how the news matters to you — not just as a decision-maker at a game studio, but also as a fan of games. Whether you read our articles, listen to our podcasts, or watch our videos, GamesBeat will help you learn about the industry and enjoy engaging with it.

How will you do that? Membership includes access to:

RSV, flu and colds: How to tell when your child is too sick for...

Latest Health December 1, 2022
© 2022 Empire Stories is a Flag Media LLC Publication. All Rights Reserved.
ES is part of the FLAG Token rewards network. Clients and partners can use FLAG Tokens for ES products and services.
ES runs 'Automatic' software. Stories posted here come from generic-topic Google news RSS feeds as well as client and partner-approved content.
If a story appears on this page that needs to be deleted due to licensing issues, please message us immediately so we can help you.