Home Latest science How to watch tonight’s Geminids meteor shower, the biggest of 2022 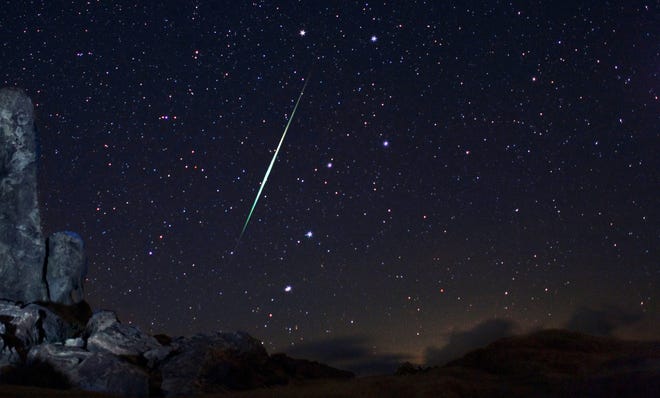 Get ready to look into the night sky at one of the best meteor showers of the year.

The Geminids meteor shower will peak Tuesday night into Wednesday morning, allowing people to see at numerous meteors race across the night sky.

Dubbed the most dependable and reliable meteor shower of the year by the American Meteor Society and NASA, the Geminids were first observed in mid-1800s and it has turned into one of the best spectacles of the year, producing bright and intensely colored meteors travelling at 78,000 miles per hour.

At its best, the meteor shower can produce 100-150 meteors per hour during the peak viewing period, but that likely won’t be the case this year due to a waning gibbous moon making it difficult to spot the meteors.

Still, NASA estimates people throughout the U.S. will be able to spot 30-40 meteors per hour on the night, and even those in the Southern Hemisphere will be able to catch a glimpse of the shower at a reduced rate.

“The Geminids are so bright that this should still be a good show,” NASA said.

How to watch the Geminids meteor shower tonight

Meteors can be seen throughout the country at your local time.

NASA says the showers will be visible beginning at 9 p.m. to 10 p.m. EarthSky says the peak of the night will be around 2 a.m. because that’s when its radiant point is highest in the sky.

No equipment is needed to view the meteors, but EarthSky suggests giving yourself at least an hour to watch since it takes roughly 20 minutes for eyes to adjust to the dark.

It is recommended to sit in a chair as opposed to standing and looking up for the most comfortable experience.

With the bright moon, Bill Cooke, lead of NASA’s Meteoroid Environments Office, suggests sitting in the shade of a house or tree while also being able to see the open night sky to get rid of any moon interference.

If you’re unable to watch the peak tonight, the shower will run through Dec. 17, but at a much lower rate.

What’s everyone talking about?: Sign up for our trending newsletter to get the latest news of the day