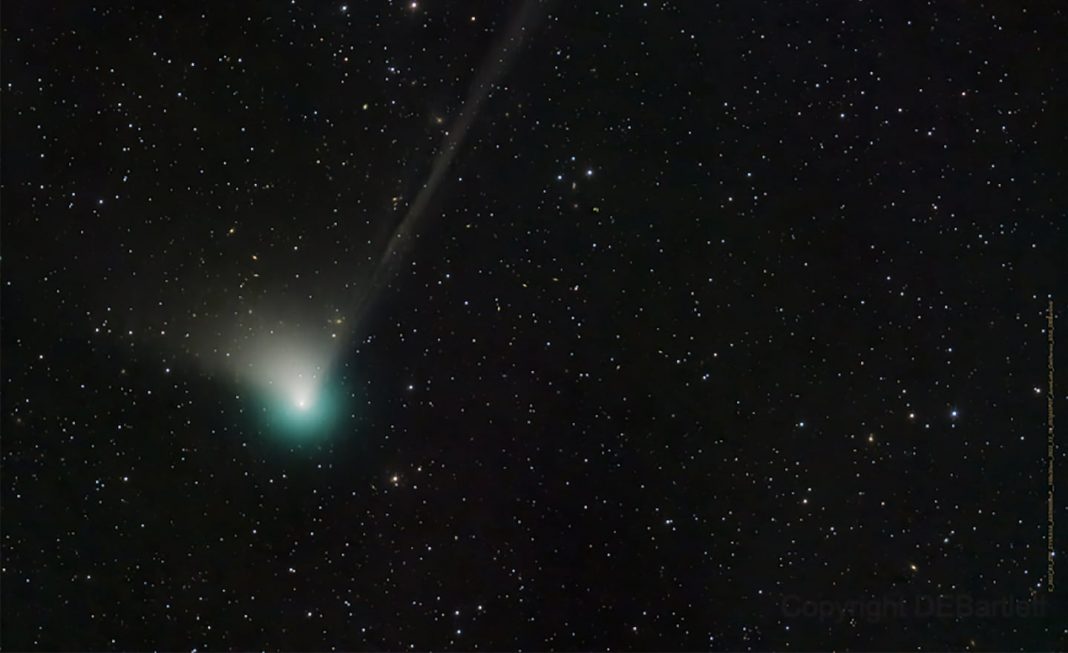 Fifty-thousand years ago, the Sahara Desert was wet and fertile. The Stone Age in Africa was just beginning, and the world’s first sewing needle was invented. It was also the most recent time that Comet C/2022 E3 (ZTF) swung past Earth.

The long-forgotten comet has recently returned to Earth’s night skies, appearing as a faint eraser-smudge that some have even spotted with the naked eye in the darkest areas. Catching a glimpse of it won’t be easy, but considering it’s your last (and first) shot, it may be worth a try.

Experts point to Feb. 1 or 2, which is when the comet will make its closest pass to Earth, as the most opportune time but — with binoculars or a telescope — you can probably spot it starting now.

Comets are large bodies made of dust and ice. They orbit the sun in elliptical paths, accelerating as they approach perihelion (an object’s nearest pass to the sun), and slow somewhat as they recede to the far outer reaches of the solar system.

Every comet has its own period, or the time it takes to complete an orbit and begin a new one. Short-period comets may pass by the sun once every 200 years or less. Said comets don’t travel very far out in the solar system (usually only to the Kuiper belt, or a region just beyond Neptune), and begin their return trips more swiftly.

The frozen core of a comet, known as a nucleus, is usually less than 10 miles wide. That’s about the size of a small city, or the volume of a single extremely large mountain.

Comets heat up as they approach the sun. That causes some of the ice to ablate into gas. As gas escapes the comet, it can carry dust with it. The combination gas/dust patch swallows the comet’s nucleus in a cloud known as a “coma,” then streams away in the form of a gently arcing tail.

A second wake, known as an “ion tail,” which is tied to ultraviolet solar radiation causing electrons to leap from the coma, always points directly away from the sun because of the “solar wind.”

Comet C/2022 E3 (ZTF) was discovered by two astronomers on March 2, 2022. They were using the Zwicky Transient Facility, made up of an ultrasensitive camera attached to the Samuel Oschin Telescope at the Palomar Observatory in California’s Palomar Mountain Range.

At that point, it was orders of magnitude too dim to be seen with the naked eye (or even with regular telescopes). By November, it had brightened to the point of almost being visible to the highest-quality binoculars from dark areas. It was found to have a period of roughly 50,000 years.

It is believed that C2, or diatomic carbon (picture two carbon atoms bonded together), is present in the head of the comet. When excited by incoming solar radiation, it emits photons (packets of light) at wavelengths we see to be green.

Where has it been this whole time?

In a land far, far away. Until comets approach Earth and become bright enough that humankind’s most light-sensitive technology can spot a “new” unidentified object in the night sky, we simply can’t know about their existence.

Quick look at the comet from Central Virginia this morning. 150″ of exposure time – shot between breaks in the clouds. Chances for seeing this with the naked eye greatly increase over the next week!

Viewers in the Northern Hemisphere can look northward in late January or early February. That said, it is estimated that the comet will peak only a bit brighter than magnitude 6, which is astronomer talk for “barely visible.” That will be complicated by the waxing crescent moon, which will peak as full on Feb. 5.

If you’re hoping to catch a glimmer of its distant and muted splendor, find a dark location isolated from city lights. Binoculars probably will do the trick, but you’ll also need a little patience. A telescope would provide the clearest view.

Darker skies due to this weekend’s new moon may allow viewing opportunities, but probably not with the naked eye.

After a couple of weeks, the comet will disappear from our skies the same way it appeared — with little fanfare. The comet was estimated to have a period of 50,000 years based on its trajectory. However, there are simulations that indicate it could “escape” the solar system and essentially outrun the sun’s gravitational forces, which might mean it will never return — or at least won’t make an appearance for millions of years.