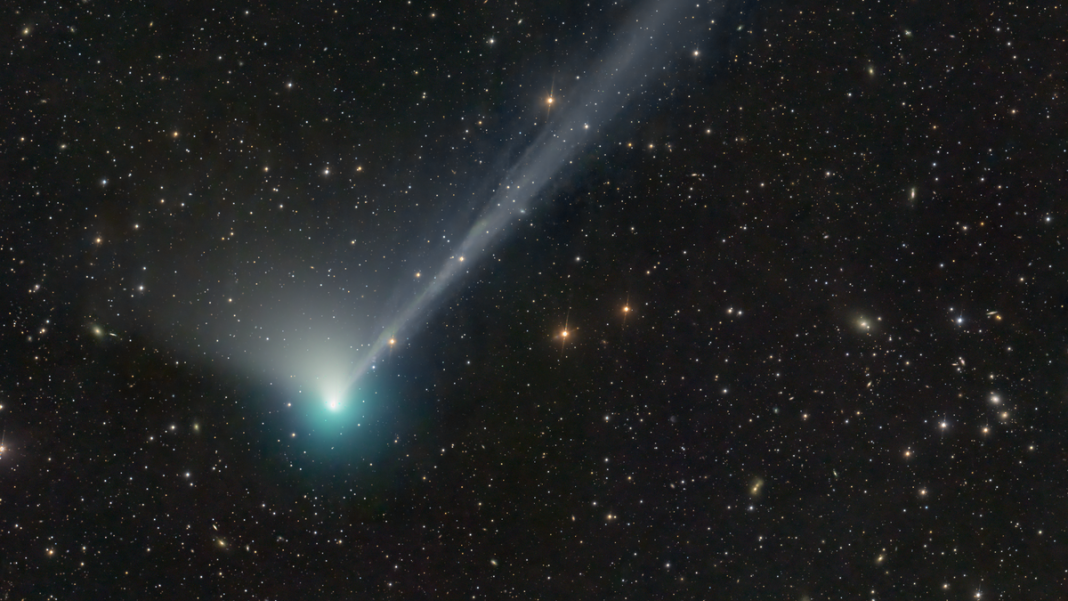 Deep in the Stone Age, when Neanderthals still lived alongside Homo sapiens, our ancestors might have been agog at a green light in the night sky. Now, that light—C/2022 E3 (ZTF) (more familiarly, the Green Comet)—is back.

The Green Comet’s highly elliptical orbit means it will take a long time for it to swing past Earth again—about 50,000 years, to be specific. And that’s if it repeats its 50,000-year sojourn, which it may not.

Astronomers discovered the comet in March 2022 using the Samuel Oschin robotic telescope at the Zwicky Transient Facility. It passed perihelion (when it is closest to the Sun) on January 12.

Observers in the U.S. can see the comet now through early February, potentially with the naked eye if you’re in a dark viewing area, but your chances will be better using binoculars or a telescope. The best time to see the comet is in the predawn hours, according to NASA.

Currently, the comet is toward the constellation Boötes and near Hercules, EarthSky reports. (If you’re having trouble finding the comet’s position, you can consult a handy interactive sky chart.) The comet’s location makes it difficult for observers in the Southern Hemisphere to see. From its current location in the night sky, its projected path charts it past Ursa Minor (the Little Dipper), with it passing by Camelopardis at the time of its closest approach.

Comets glow thanks to a combination of their chemical composition and sunlight. Comets that pass near the Sun are illuminated and warmed by its energy, causing molecules on their surface to evaporate and fluoresce. Comet heads glow green when they contain cyanogen or diatomic carbon, according to NASA.

While the comet may reach a brightness of magnitude 5, it’ll probably be helpful to use a pair of binoculars or a telescope if you’re having difficulty spotting the object on a clear night.

The incoming space rock is not the only recent green comet; in 2018, the comet 46P/Wirtanen was bright enough for observers to see with the naked eye, and in 2021, the Comet Leonard glowed green as the ice-ball made its cosmic trajectory.

So keep your eyes up on the clear nights to come. If you see something with a faint green glow, it’s probably our newest cosmic visitor.