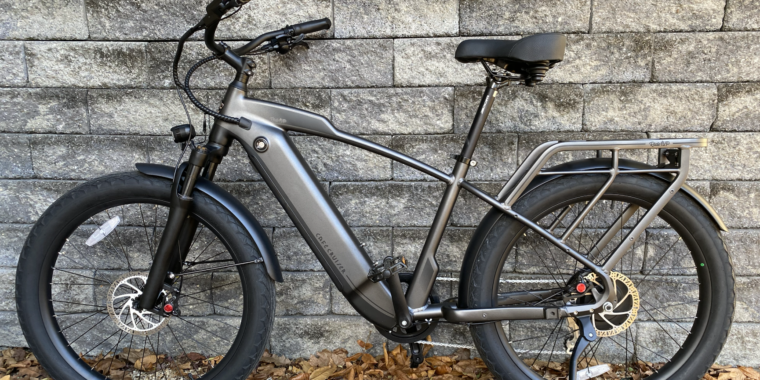 If your complete list of bicycle formats consists of road and mountain, then you may struggle to remember what a cruiser is. Think of a long, heavy frame with handlebars that sweep back in a wide curve, allowing the rider to perch nearly upright on a wide, comfy seat. Fat tires make for a cushy ride, often down a road that runs alongside a beach in a warm, sunny climate.

Based on its name and aesthetics, the Ride1Up Cafe Cruiser is meant to evoke those bikes. And it does a passable job with fat tires, sweeping handlebars, and an upright riding stance. But it also provides the pedal assist of a Class 3 e-bike, meaning it’ll keep providing power until the bike hits 28 mph (45 km/hr). And that makes for a ride that’s decidedly not a casual cruise.

The Cafe Cruiser comes in both step-over and step-through frames; we tested the step-over version, which weighed in at about 30 kg (65 lbs). Its heavy rack is integrated into the frame, and the front fork has suspension to smooth out some bumps. There are a couple of spots where the frame is thicker for apparently aesthetic reasons; beyond that, the bike’s most distinctive feature is the fact that the battery drops out of the bottom of the frame rather than slotting into place from above. This makes it somewhat harder to get it back into place if you remove it, but it allows space to put a water bottle holder on top of that tube.

Most of the components are pretty standard, such as solid disc brakes and thick, heavy tires that soak up bumps and rough pavement. It has a set of eight gears on a rear derailleur; combined with five levels of assist, these give you many options to fine-tune your ride. Having tried both fixed and geared e-bikes, it’s hard to overstate how much more pleasant and enjoyable this makes the overall experience.

As for the assist, its level is controlled by up and down arrows on a standard controller. The display is also pretty standard, showing speed, miles traveled, power output, etc. Front and rear lights are integrated into the electronics and can be switched on and off from the controller.

One odd feature is a throttle, which lets you activate the motor without pedaling. Technically, Class 3 e-bikes should not have a throttle; those are part of the Class 2 specification, which limits the maximum speed to 20 mph (32 km/hr). On the Cafe Cruiser, the throttle exists and cuts out at 20 mph, but the pedal assist doesn’t cut out until 28 mph. Maybe it’s a Class 2.5?

In any case, the motor is a standard 750-watt unit that generates 60 Newton-meters of torque. That’s not enough for it to power up every hill without slowing down, but enough so that it never ground to a halt.

The motor is engaged by a cadence sensor, which simply registers whether you’re pedaling and not whether you’re generating any force. As such, it’s possible to set a high level of assist and keep the pedals rotating gently, and have the bike barrel along at high speed. Doing this will definitely burn through the battery faster, putting you on the low side of Ride1Up’s 50-80 kilometer (30-50 mile) range; keeping the assist low and pedaling harder stretches the battery out for longer distances.

Aside from the frame, the most distinctive feature is probably the handlebars, which are fairly wide and arc backward from the stem. With my height, I had to angle the bars upward from the stem to have a comfortable cruising position. The ends of the bars are covered in a faux leather grip that’s wider at the ends than it is where it meets the handlebar. I found this somewhat awkward, as your hands tended to slip toward the narrower end, smushing up against the brake levers a bit. Matters were only worse when I wore gloves on a colder day.

As with other bikes in this price range, the Cafe Cruiser was delivered with some assembly required: attach the front wheel, fender, and light, and add the handlebars and pedals. All the tools needed were included, and there was nothing complicated about the process.

Overall, in terms of assembly and components, the Cafe Cruiser was pretty typical of what you’d see in bikes in its price range. The real standout is its cruiser design, which has some implications for the riding experience. That, and the fact that Ride1Up chose to make it a Class 3.