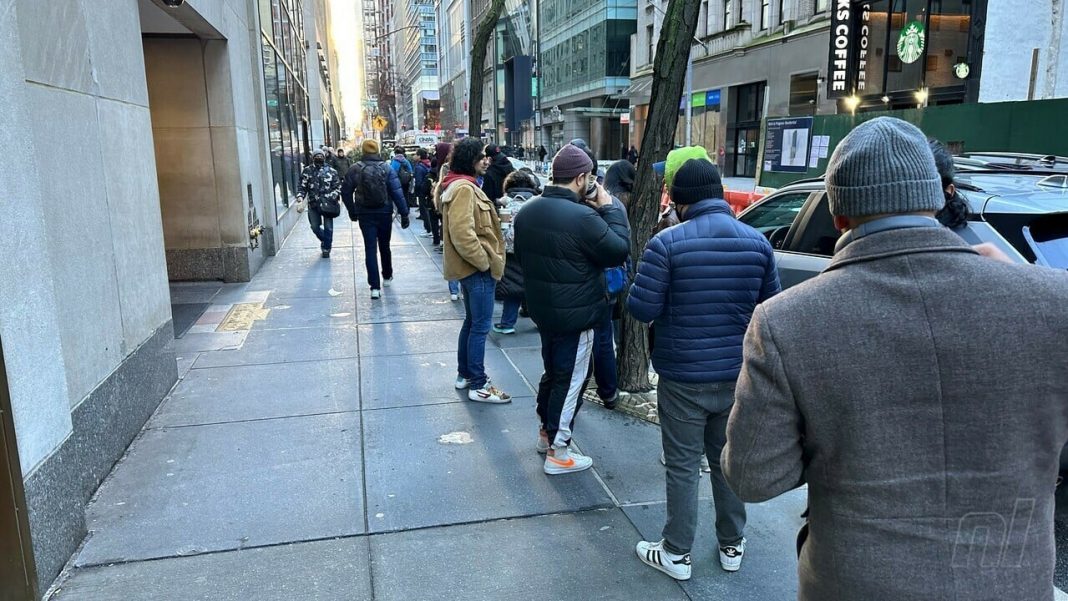 Human element aside, the line started moving, with the staff letting people in in batches of about ten at a time. I started to get excited, I couldn’t wait to see what the store had prepared for Fire Emblem Engage’s somewhat divisive red and blue character design. So, scrolling casually towards the entrance to make my way into the store I was somewhat dismayed at the utter lack of Fire Emblem branding on display.

After being flogged to death by Fire Emblem character DLC in Smash Bros. for years, you’d think the launch of Engage would warrant a banner or standee, but Friday’s launch was disappointingly barebones. Surely all the Pokémon Scarlet/Violet branding cost a pretty penny, so there’s no need to discard it, but there were no Engage displays to be found anywhere, save for a lone kiosk displaying the game which, when the game is idling on a battlefield map, isn’t a particularly gripping watch. Moreover, unlike the past half-dozen events, there were no posters, stickers, or magnets on offer for early adopters.

So, with zero Engage-related merch or promotional materials to entertain us, we spoke with some Fire Emblem fans in line about what made them get out of bed on a Friday morning in NYC’s winter to queue up for Fire Emblem.

What made you come out and stand in line this morning for Fire Emblem Engage?

“I’ve been a fan of Fire Emblem since Awakening. I’m visiting New York —I used to live here— it’s my first time back since [Nintendo NYC] was Nintendo World, so I figured the Fire Emblem Engage launch is a good time to come and I heard exciting things about this game.”

Are you getting the regular edition or the Divine Edition?

“I’m getting the Divine Edition.”

As a Fire Emblem fan are you glad about the amount of support the franchise is getting lately?

“I am. Especially since I heard that [at the time] Awakening might be its last hurrah. I think Intelligent [Systems] didn’t expect it to blow up after Awakening —that’s what got me into it— so I’m glad it’s gotten the exposure that it has, even if [Smash Bros. fans] might think it’s too much. I’m here for it.”

NL: Good morning. Can you tell us your name?

What made you get out of bed at 8:00am to stand in line at Nintendo NYC?

“Since preorders are sold out at retail, this is the only option —first come first served— for me to get the Divine Edition specifically. Of course the new amiibos, too [holds up a Marth amiibo].”

[points at Eli’s Amiibo] Isn’t that a reissue?

How do you feel about how Fire Emblem’s emergence as a mainline Nintendo franchise?

“I think [the franchise] kind of went down when it came to Fire Emblem Radiant Dawn and with Ike, but I think more gamers and new players to the franchise have come on because of Awakening, and then Fates, Echoes, and Three Houses. Now Fire Emblem has become more popularized, like Mario and Pokémon. Obviously, Pokémon is more popular, but Fire Emblem on the other hand is gaining that level of popularity because of the DLC for Smash Bros.”

So, regardless of whether Nintendo NYC rolls out the red carpet equally for every launch, the fans still have a lot of love for Nintendo’s strategy game. Now if only Intelligent Systems and Nintendo could invest the same amount of energy into their other strategy franchise, Advance Wars, strategy game fans would be spoiled for choice.