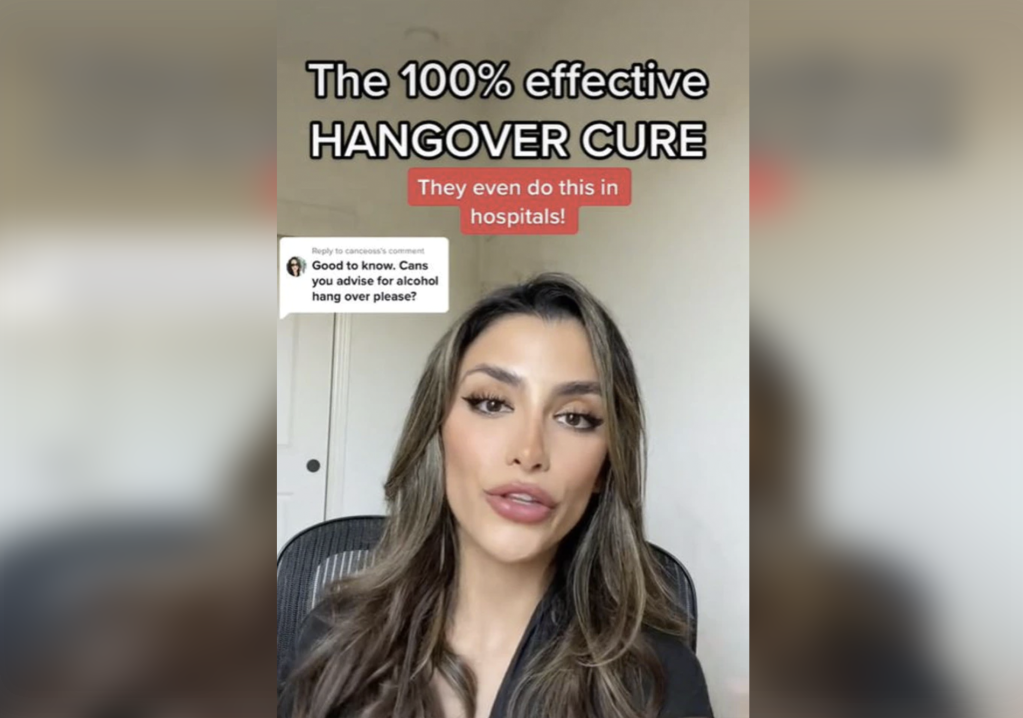 The party season is in full swing, but nothing kills that festive cheer quicker than a prolonged and painful hangover.

However, a US pharmacist has shared the hangover “cure” she swears is “100 per cent effective” – and those who have put it to the test agree.

Ari, a licenced doctor in LA, revealed she takes vitamin B complex, magnesium and a folic acid supplement alongside an electrolyte drink, claiming it is “single-handedly the most effective way” to beat those awful morning after symptoms.

Describing the concoction as an “oral version of an IV fluid bag”, Ari said it helps ease symptoms of dehydration and replenishes electrolytes.

Her tip has since gone viral on TikTok, with many sharing follow-up videos telling of their success. So does it really work? According to Australian experts, there’s a scientific reason why it is so effective.

Does this viral hangover ‘cure’ work?

Social media users have been raving about Ari’s tip, with one Australian user stating people “dying a slow death from a hangover should take notes”.

After buying all the items needed, TikTok user @brokebutmakeitboujee said: “It works, it really works.

“All of that is super cheap – probably the most expensive thing is the Hydralyte – but you know what, it’s worth it to not be dying at Christmas parties,” she said.

“Theoretically and anecdotally, it would make sense that it can help relieve a hangover, yes,” she said.

“Depending on the dose and purity of the supplements taken (which the viral ‘cure’ doesn’t mention) it may lessen the effects only slightly in some, whilst for others it may be very effective.”

However, she warned the doses given out in IV bags in hospitals are “often much higher than those recommended on the back of over-the-counter labels of vitamins” which could also affect results.

Why is it effective?

“B vitamins are essential enzymes that are used in the process of turning carbohydrates and alcohol into energy. Thus, taking more B vitamins can assist your body in efficiently metabolising (breaking down) alcohol.

“The electrolytes in the ‘cure’ (such as sodium, potassium, magnesium and calcium) may improve symptoms where a deficiency is present, but there doesn’t seem to be evidence that a single bout of drinking causes electrolyte deficiencies or imbalances, assuming no vomiting or diarrhoea has occurred.

“In this instance, electrolytes may assist.”

While there’s scientific research to back up Ari’s hangover “cure”, Sally pointed out she hasn’t advised anyone the best process for using it.

“There is no clinical evidence that shows a significant difference between taking B vitamins for hangovers in the morning or at night. In other words, you can take it at any time that you find convenient,” she said.

“Just make sure to avoid caffeine for at least an hour after taking supplements as it can inhibit efficient absorption of the vitamin.”

Sally also warned anyone wanting to try it this silly season, to be mindful of the quality of product they are buying.

“Not all ‘vitamin B complexes’ contain the same B vitamins or ratios,” she said.

“B1 (Thiamine), B2 (Riboflavin), folic acid, B6 and B12 all play a major role in the functioning of the brain and nervous system and arguably could be beneficial in this instance.”

However, electrolytes can be taken once a loss has occurred, meaning after drinking is fine.

“Remember – the only reliable hangover cure is limiting alcohol intake in the first place,” she said.

Putting it to the test

Of course,news.com.au couldn’t tell you about a hangover cure without testing it for ourselves, and I was happy to be the guinea pig.

I decided to take my vitamin B complex and folic acid the morning of an event, then had an electrolyte drink and the magnesium supplement when I got home post-party.

The next morning I was pleasantly surprised as I’d slept through, something which never happens after a few drinks. I also didn’t have any other pesky symptoms such as headaches or cravings for junk food, saving my bank balance and my waistline.

What is a hangover?

Hangovers “happen” because of alcohol and its effects on the brain,” Sally said.

“Whilst we don’t actually know the specific mechanism of action, we do have some ideas.

“Ethanol, recognised as a toxin by the body, triggers an inflammatory response that damages and dysregulates neurons in the brain.

“Headaches and other lovely hangover symptoms are likely caused (in part) by the damage from this inflammation and oxidative stress suffered by the brain and other tissues.

“This can result in impaired energy metabolism.”

Sally – who also runs the Instagram page @TheFitFoodieBlog – explained another chemical found in some liquors can also “worsen” hangovers.

Sally – who also runs the Instagram page @TheFitFoodieBlog – explained another chemical found in some liquors can also “worsen” hangovers.

“Congeners are a chemical found in some alcohols that may be another contributing factor,” she said.

“They’re found in darker liquors such as whisky, rum and brandy, along with red wine. “Studies seem to show congeners worsen hangovers when compared with other drinks of the same alcohol content.