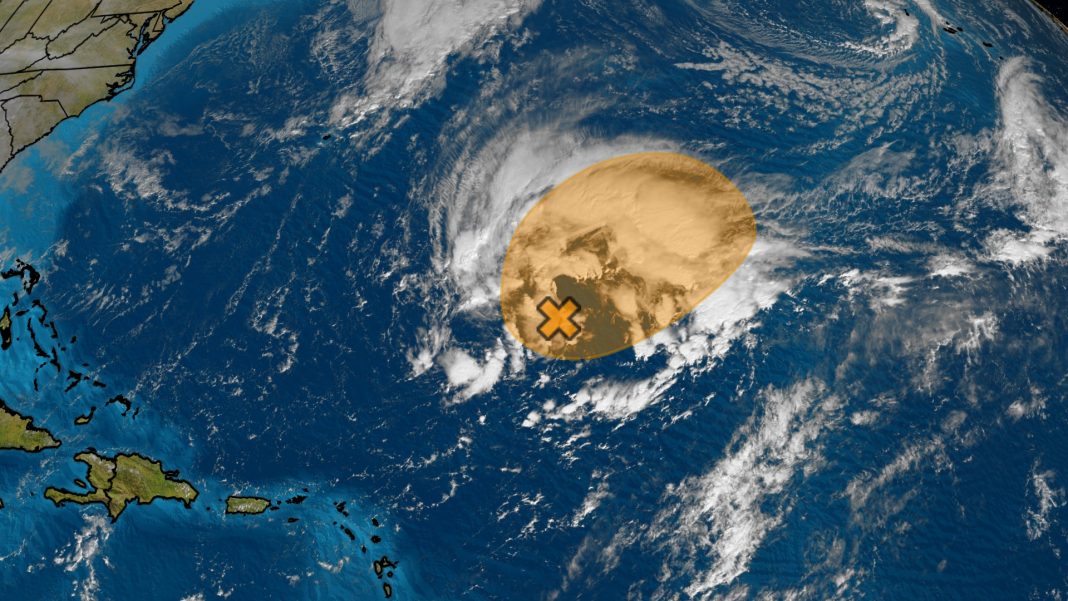 H​urricane season may have officially ended a week ago, but low pressure in the central Atlantic Ocean, while no direct threat to land, is being monitored for possible subtropical development.

The National Hurricane Center issued a special tropical weather outlook on M​onday morning, that highlighted a sprawling area of low pressure over 700 miles northeast of the Leeward Islands.

T​hey’re calling it Invest 99L, a naming convention for disturbances that the NHC is monitoring by collecting special data and running computer forecast models.

T​hey’ve given Invest 99L a medium chance of subtropical development over the next few days.

N​ot A Land Threat, But A Wave Generator

We’ll come back to what subtropical means, but first, even if this system does develop into a depression or storm, it won’t directly threaten land.

I​t’s expected to meander slowly through early Thursday before accelerating to the northeast into the North Atlantic late this week. It could be named “Owen,” even if it becomes a subtropical storm.

The low is expected to become strong late this week and that will generate ocean swells that will push southward and batter the north-facing coasts of the Leeward Islands, Virgin Islands, Puerto Rico, Hispaniola and the Bahamas with high surf this week.

What Is Subtropical Development?

A subtropical depression or storm is a blend of two types of low-pressure systems.

One of these is a pure tropical storm that has warm air vertically through its circulation. The other type is a low you typically see attached to cold and warm fronts on weather maps known as an extratropical storm.

O​ccasionally, a low attached to fronts will sprout enough thunderstorms near its center to warm its core. Once the thunderstorms persist and the fronts largely wash out, it’s called a subtropical depression or subtropical storm, depending on its winds.

T​he NHC issues advisories, watches and warnings on these subtropical systems because they can become tropical storms and even hurricanes.

W​e go much more in-depth on this topic, here, if you’re interested.

H​ow Weird Is This For December?

W​e’re guessing you didn’t expect to read all of this during the first full week of December.

Typically by December, wind shear in the Atlantic Basin is too strong to allow for development and the parade of disturbances known as tropical waves that often serve as seeds for tropical storms has long ended.

But sometimes, ocean water remains just warm enough and wind shear is weak enough to allow for development, even in December.

A​ long-used rule of thumb is the need for ocean water to be at least 80 degrees to provide enough warm and humid air to fuel development.

T​his area of low pressure is parked over ocean water around 80 degrees, warmer than average temperatures for early December.

S​ubtropical, even tropical, development has happened before in December, but it’s been a few years.

According to NOAA’s historical database, 13 systems have become tropical or subtropical storms in December in records dating to the mid-19th century.

A​s you can see, most of these tracks were in the central Atlantic Ocean, including the area where the current disturbance is located.

T​he last December storm was nine years ago. A short-lived subtropical storm south of the Azores in early December 2013 was found by NHC scientists after examining data following the end of the season.

A​ few of these storms have affected land.

T​he last fully tropical storm to form in December, Olga, dumped flooding rain from the Leeward Islands to Puerto Rico and Hispaniola in the second week of December 2007. Interestingly, Olga’s remnant actually made it into the Gulf of Mexico before they merged with a cold front.

There have even been hurricanes in December.

W​hile it became a tropical storm in late November, the last December hurricane was Epsilon during the record-smashing 2005 season.

O​n New Year’s Eve 1954, Alice became a hurricane before it slammed into the northern Leeward Islands on Jan. 2, 1955.