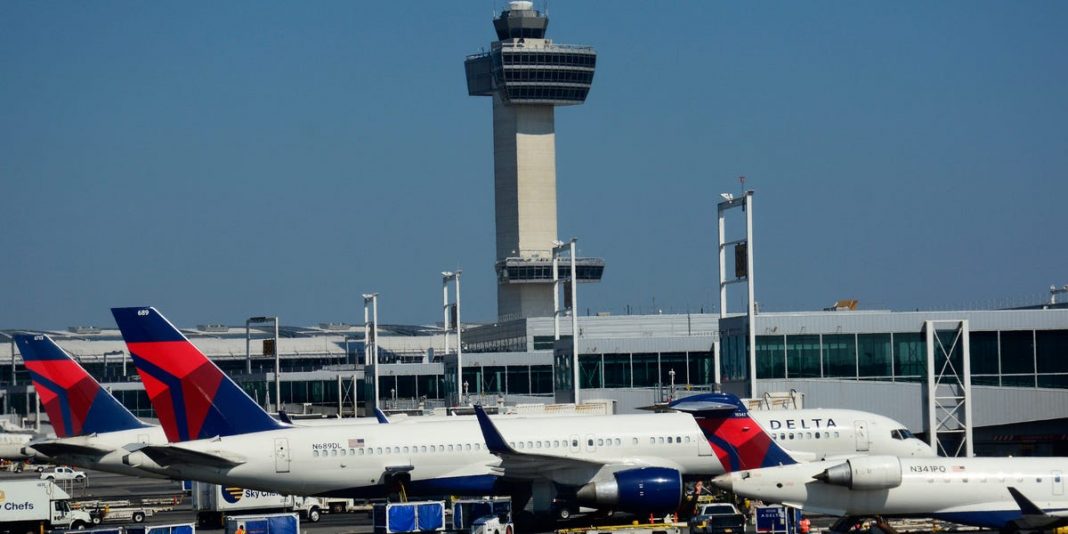 Thanks for signing up!

Access your favorite topics in a personalized feed while you’re on the go.

A Delta passenger said there were screams from his fellow travelers when a Delta plane was forced to abort its takeoff after another aircraft passed in front of it on the runway.

The Federal Aviation Administration (FAA) said it was investigating an incident involving a Delta Boeing 737 and an American Airlines Boeing 777 at New York’s JFK airport on Friday night.

Donall Brian Healy, who was travelling on Delta 1943 flight bound for the Dominican Republic, told Insider the jet came to a very sudden halt two or three seconds after it began accelerating down the runway to take off, thrusting passengers forward in their seats.

“There were vocal reactions, a few screams when the plane first started slowing, then total silence. I felt a surge of adrenaline knowing this was not normal, and not knowing what to expect,” Healy said. “As the plane came to a stop, I realized we’d be OK – I thought it was a mechanical thing.”

Healy said the pilot told passengers that another plane had passed in front of them, forcing him to abort the takeoff. The aircraft took an hour to taxi back to the terminal airport, he added.

Healy cancelled his flight after the incident and was given a full refund by Delta.

In a statement to Insider, the FAA said preliminary analysis found the Delta flight stopped its takeoff roll on the runway about 1,000 feet from American flight 106 as it passed on an adjacent runway, and that no one was hurt in the incident.

The near-miss was initially flagged by Twitter user JonNYC.

ABC7 reported that the Delta jet was traveling at 115 miles an hour when it aborted its takeoff.

A Delta representative told Insider that 145 passengers and six crew were on the flight. Passengers were taken off the plane and given overnight accommodation due to crew resources before departing on Saturday morning.

“The safety of our customers and crew is always Delta’s number one priority. Delta will work with and assist aviation authorities on a full review of flight 1943 on Jan. 13 regarding an aborted takeoff procedure at New York-JFK. We apologize to our customers for the inconvenience and delay of their travels,” the representative said.

An American Airlines representative said it would defer to the FAA and that its flight departed as planned for London’s Heathrow Airport.