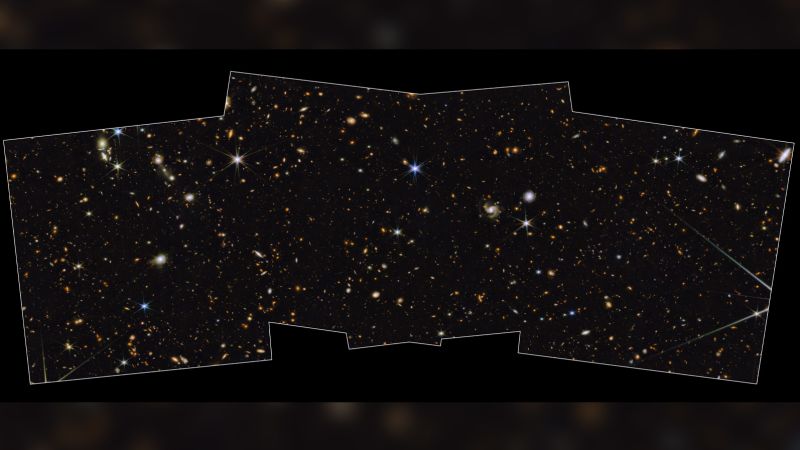 The James Webb Space Telescope has captured a unique perspective of the universe, including never-before-seen galaxies that glitter like diamonds in the cosmos.

The new image, shared on Wednesday as part of a study published in the Astronomical Journal, was taken as part of the Prime Extragalactic Areas for Reionization and Lensing Science observing program, called PEARLS.

It’s one of the first medium-deep-wide-field images of the universe, with “medium-deep” meaning the faintest objects visible, and “wide-field” referring to the region of the cosmos captured in the image.

“The stunning image quality of Webb is truly out of this world,” said study coauthor Anton Koekemoer, research astronomer at the Space Telescope Science Institute in Baltimore, who assembled the PEARLS images into mosaics, in a statement. “To catch a glimpse of very rare galaxies at the dawn of cosmic time, we need deep imaging over a large area, which this PEARLS field provides.”

The Webb telescope focused on a part of the sky called the North Ecliptic Pole and was able to use eight different colors of near-infrared light to see celestial objects that are 1 billion times fainter than what can be seen with the unaided eye.

Thousands of galaxies gleam from a range of distances, and some of the light in the image has traveled almost 13.5 billion years to reach us.

“I was blown away by the first PEARLS images,” said study coauthor Rolf Jansen, research scientist at Arizona State University and a PEARLS coinvestigator, in a statement.

“Little did I know, when I selected this field near the North Ecliptic Pole, that it would yield such a treasure trove of distant galaxies, and that we would get direct clues about the processes by which galaxies assemble and grow, he said. “I can see streams, tails, shells and halos of stars in their outskirts, the leftovers of their building blocks.”

Researchers combined Webb data with three colors of ultraviolet and visible light captured by the Hubble Space Telescope to create the image. Together, the wavelengths of light from both telescopes reveal unprecedented depth and detail of a wealth of galaxies in the universe. Many of these distant galaxies have always eluded Hubble, as well as ground-based telescopes.

The image represents just a portion of the full PEARLS field, which will be about four times larger. The mosaic is even better than scientists expected after running simulations in the months before Webb began making scientific observations in July.

“There are many objects that I never thought we would actually be able to see, including individual globular clusters around distant elliptical galaxies, knots of star formation within spiral galaxies, and thousands of faint galaxies in the background,” said study coauthor Jake Summers, a research assistant at Arizona State University, in a statement.

Other pinpricks of light in the image represent a range of stars in our Milky Way galaxy.

Measuring diffuse light in front of and behind the stars and galaxies in the image is like “encoding the history of the universe” because it tells a story of cosmic evolution, according to study coauthor Rosalia O’Brien, a graduate research assistant at Arizona State University, in a statement.

The PEARLS team hopes in the future to see more objects in this region, like distant exploding stars or flares of light around black holes, as they vary in brightness.

“This unique field is designed to be observable with Webb 365 days per year, so its time-domain legacy, area covered, and depth reached can only get better with time,” said lead study author Rogier Windhorst, regents professor at Arizona State University and PEARLS principal investigator, in a statement.