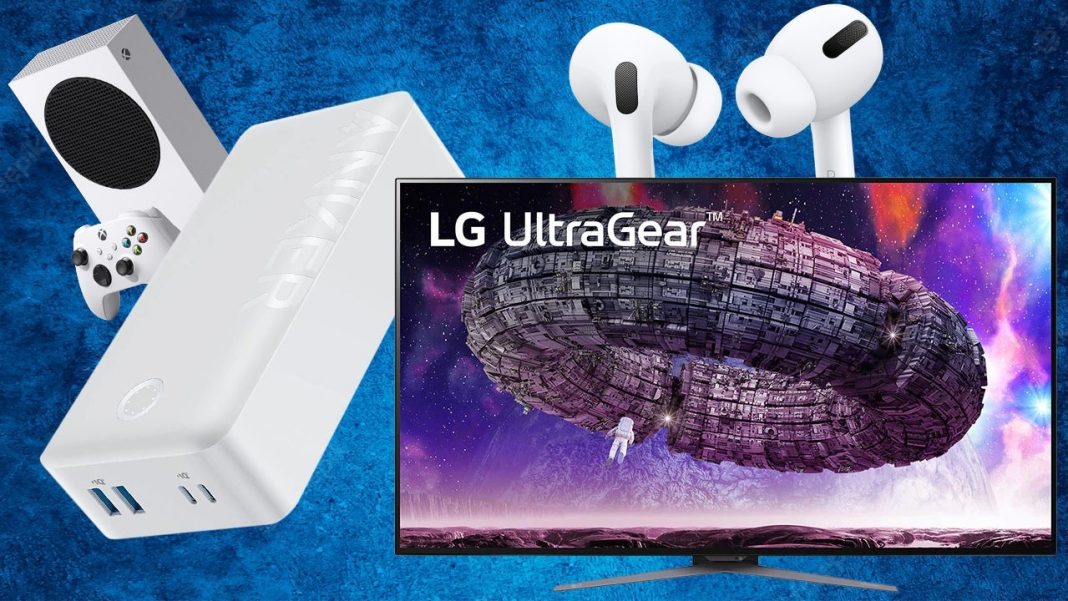 Today’s daily deals include a massive 40,000mAh power bank that can recharge your Nintendo Switch console or iPhone about ten times on a single charge, a Switch docking station that can also charge four extra Joy-Con controllers, a Quest 2 VR headstrap with a built-in extended battery, the Lord of the Rings trilogy on Kindle, and more.

If you need the maximum amount of juice in a compact brick-style power bank, then look no further than the Anker PowerCore 40K 347 power bank with a massive 40,000mAh of charging capacity. It can effectively charge a Nintendo Switch console (4,200mAh) or Apple iPhone 14 Pro Max (4,300mAh) almost ten times or an Apple iPad Pro 12.9″ (9,700mAh) four times. It also features USB Power Delivery up to 30W. Although this is a portable brick, it won’t fit in your pocket. It measures about 6.5″x3″x2″ and weighs almost 2 pounds. It also isn’t allowed as carry-on on airplanes (the maximum capacity is around 26,000mAh).

The 48GP900-B is the first Ultragear gaming monitor that uses an OLED panel. This is a simliar WOLED panel to the one that you find in the 48″ LG C1 OLED TV but there are a few key differences. Instead of the semi glossy coating found on the OLED TV, the 48GP900 features an anti-glare low reflective coating that is undoubtedly a better fit for close up monitor usage. It also has DisplayPort connectivity and lacks the built-in Smart TV interface. It does carry over the HDMI 2.1 ports with 4K @ 120Hz compatiblity for PS5 and Xbox Series X owners, as well as VRR and G-SYNC support. Additionally, the 120Hz refresh rate can be overclocked to 138Hz when used as a PC monitor. Lastly, if aesthetics matter for you, there is subtle RGB backlighting on the rear of the monitor that isn’t present on the OLED TVs.

This is a handy all-in-one docking accessory for your Nintendo Switch, and it’s 47% off today. You plug your Switch or Switch OLED dock into this accessory and you’ll be able to charge up to 4 additional Joy-Cons along with the Switch and its attached Joy-Cons all from a single power cable. There’s even space to store up to eight Switch game cartridges.

This might just be a better headband for your Oculus/Meta Quest 2 VR headset than even the official Elite headstrap, and also at a lower price. The Kiwi headstrap is an adjustable cushioned rigid wraparound headset much like the Elite Strap. It features a built-in 6400mAh battery that’s positioned behind your head to provide a better counterbalance to the forward heavy visor and increases your playtime by almost 3X (the Quest 2 has a 3640mAh battery). At this price it’s cheaper than the Elite strap without any battery pack.

The Lord of the Rings: One Volume Kindle Edition for $5

It’s a lot easier toting around your favorite books in digital format on a single device than in physical book form. The entire LOTR trilogy is available on Kindle for only $4.99, a 70% price drop from its normal going price of $16. That means you’ll be able to read and re-read The Fellowship of the Ring, The Two Towers, and The Return of The King all on a Kindle device or your Kindle app on your smartphone or tablet.

If you’re a big outdoor sports junkie, then there are better smartwatch options than the Apple Watch. Garmin makes some of the most well known and fully featured multi-sport smartwatches around. The fenix 6X Sapphire watch features a low-powered transflective display that enables up to a whopping 21 days of battery life on a single charge. The sapphire crystal lens is extremely rugged; Garmin states that it is the third hardest mineral, right behind diamond. It has plenty of features that are geared towards the outdoor active lifestyle, including preloaded togography maps, ski maps for over 2,000 worldwide ski resorts, multiple global navigation satellite system (GPS, GLONASS and Galileo), 3-axis compass, gyroscope, barometric altimeter. sleep monitoring, and more.

Amazon has the Hisense HS214 2.1ch soundbar for only $69.99 (normally $149.99). This 26″ soundbar features a built-in subwoofer to help round out the low end. This will sound miles better than any built-in TV speaker. It’s Roku TV ready out of the box, features bluetooth for wireless streaming, and has HDMI passthrough.

For 48 hours only, Dell is offering its Alienware m17 17″ gaming laptop equipped with AMD’s most powerful CPU and GPU for $1675.79 after $700 in instant savings and stackable coupon codes “AWSMITE09” and “ARMMPPS“. That’s a phenomenal price for one of the most powerful gaming laptops available at the moment. Please note that dual stacking coupon codes are extremely rare at Dell.

This Alienware m17 config spares absolutely no expense to make the perfect gaming laptop. The newest 6000-series CPU is designed to compete with Intel’s latest Alder Lake CPUs. The AMD Ryzen 9 6900HX is the most powerful CPU in the 6000-series lineup, and it performs almost as well as Intel’s own Core i9-12900H. That is to say, it’s a monster of a processor in terms of both workstation and gaming performance.

Likewise, the AMD Radeon RX 6850M XT is currently AMD’s most powerful mobile GPU and its performance is comparable to NVIDIA’s mobile RTX 3080/Ti. It will hold its own in any game you throw at it, and you’ll certainly need the power in order to run games smoothly on the laptop’s native 4K display.

Dell is offering the Alienware Aurora Ryzen Edition R14 gaming PC equipped with a powerful GeForce RTX 3080 Ti GPU for under $1600. That’s right, you can get it for $1587.59 after $580 in instant savings and stackable coupon codes “AWSMITE09” and “ARMMPPS“. There are newer (and far pricier) 4000 series of GeForce cards out, nevertheless this is still a very powerful and very relevant gaming rig.

This Alienware gaming PC is equipped with a liquid cooled AMD Ryzen 7 5800X 8-core CPU, GeForce RTX 3080 Ti GPU, 8GB of DDR4-3200MHz RAM, and a 512GB SSD. The RTX 3080 Ti is one of the most powerful cards in the RTX 30 series linup, features DLSS and ray tracing, and is an excellent GPU for 4K gaming. It’s about 10% more powerful than the RTX 3080 at 4K. It’s on par with the RTX 3090 in gaming prowess (the RTX 3090 has more VRAM which is better for graphics workstation builds but not for gaming). This PC will be able to push just about any game at 60fps+ speeds, even at 4K resolution. The AMD Ryzen 7 5800X CPU is an excellent all-around processor and won’t bottleneck your gaming.

The Best Deals of the Week

These deals are definitely worth your attention.

Enter to win an amazing The Callisto Protocol prize pack including a HB Custom PC, a pair of Ceeze Custom Nikes and more!