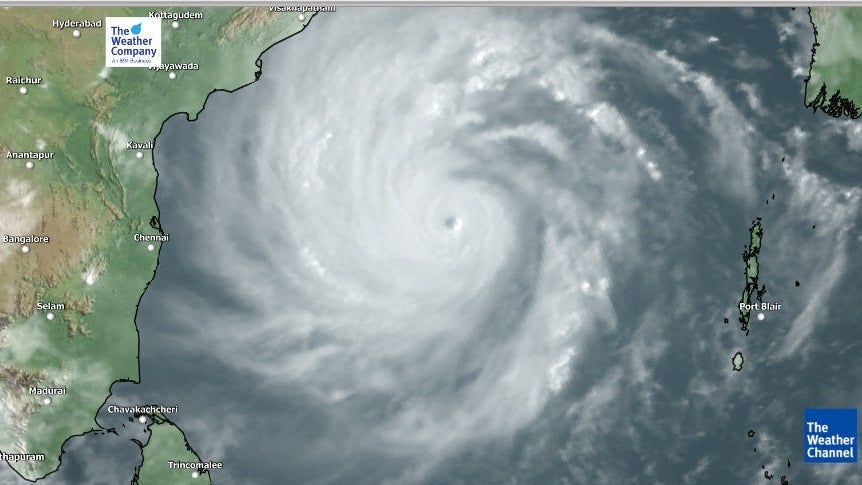 Friday, December 9: If you live in Southern India and suddenly feel the need to pull out the jackets buried in your closets, you should know that Cyclone Mandous is to blame.

The cyclonic storm is set to make landfall between the Tamil Nadu and Andhra coasts sometime between midnight today and the early hours of Saturday. And while the southeastern states will bear most of its brunt, the cyclone’s impact is being felt far and wide.

Since yesterday, mercury levels began to drop across South Peninsular India and its neighbouring regions. Light rains were also recorded in several cities.

Below, we discuss the observed as well as forecasted impact of Cyclone Mandous on some megacities that lie within the storm’s extensive range.

In the last 24 hours, Chennai’s Meenambakkam station recorded a daytime temperature of 25°C (4°C lesser than normal!) and 68 mm of rainfall.

Today, heavy to very heavy rain (64.5 mm-204 mm) is expected to lash the Tamil Nadu capital, leading the India Meteorological Department (IMD) to issue an orange alert (meaning ‘be prepared’) over the city. Strong winds gradually increasing to gale speeds of the order of 60-70 kmph gusting to 80 kmph are also likely from Friday evening to early Saturday morning.

Tomorrow’s minimum and maximum temperatures are expected to touch 22°C and 25°C, respectively.

No significant rainfall is expected in the city as of now. Just generally cloudy sky with haze is likely today, and this may be accompanied by light showers tomorrow.

The minimum and maximum temperatures are expected to touch 16°C and 28°C, respectively, today.

While Bengaluru’s daytime temperatures stood at 26°C yesterday, they dropped to 22°C today. The nighttime temperatures, on the other hand, will remain more or less normal at 19°C.

Generally cloudy skies with light rains are possible today, but thundershowers may be on the cards tomorrow.

Mumbai’s Colaba area witnessed a drop in mercury levels yesterday when the maximum temperature touched 31.2°C — 2 units below normal. But the entire city might experience a slightly cooler days at 32°C today and tomorrow. Nighttime temperatures may drop as low as 18°C.

While no rainfall activity is likely as of today, generally cloudy skies may blanket the Maharashtrian capital from tomorrow onwards.