Sign up to myFT Daily Digest to be the first to know about Coronavirus pandemic news.

Scientists are warning that the world has entered a dangerous new phase of the pandemic, as the coronavirus third-wave creates fertile breeding grounds for more infectious and potentially vaccine-resistant new variants.

The surge of Covid-19 around the globe, with the World Health Organization reporting new cases up 8 per cent and deaths up 21 per cent in just a week, has parallels with the conditions at the height of the pandemic last year when four highly transmissible viral variants originated.

Virologists say the Sars-Cov-2 virus that causes Covid-19 may have already developed into more threatening forms which have so far evaded detection because they have not yet infected enough people.

“We’ve been surprised more than once by the evolution of variants, though maybe we shouldn’t have been because the virus only recently moved into humans and is still adapting to its new hosts,” said Nick Loman, professor of microbial genomics at Birmingham university in the UK. “We’ve been humbled by this virus before and no one can predict confidently what will happen in the future.”

Global infections have surged to an average of 540,000 per day, and an average of almost 70,000 daily deaths, the WHO said this week, driven by the more transmissible Delta variant.

As well as spreading in countries with low inoculation rates, a new variant could establish itself in a population with high immunisation levels such as the US or much of Europe, where other measures to control transmission — notably mask wearing and restricting social contacts — have been lifted.

WHO “variants of concern”, its most serious category, are named with the Greek letters Alpha, Beta, Gamma and Delta. All four emerged in the second half of 2020, although it took some time for the more transmissible viruses to spread more widely. The next “variants of interest” category — suspected of being more transmissible or vaccine resistant — includes Eta, Iota, Kappa and Lambda.

Scientists say further evolutions of the virus are inevitable, because of the way the genetic code can be altered by errors in the copying mechanism during replication. Most mutations are neutral but occasionally one increases the “fitness” of the virus, enabling it to infect human cells more easily.

“We’re trying to understand why Delta is more transmissible,” said Maria Van Kerkhove, the WHO’s Covid-19 technical lead. “Some of the mutations allow the virus to adhere to the cell more readily and therefore infect it.”

Delta is about twice as transmissible as the Alpha variant first recorded in England, which was itself 40 per cent more infectious than earlier forms of the virus first detected in China.

The reproduction number R0, which measures transmissibility, is estimated at about 3 for the original virus in Wuhan and close to 6 for Delta, Loman at Birmingham university said. That means an average person infected with Delta in a population unprotected by vaccination, prior infection and social distancing measures would pass it on to six others.

Most variants of concern or interest have accumulated about 20 individual mutations in the 30,000 biochemical letters that make up the genetic code. Molecular research by virologists such as Ravi Gupta, a Cambridge university microbiology professor, aims to provide a greater understanding of how they affect the behaviour of Sars-Cov-2.

Gupta said changes in the spike protein, enabling the virus to enter human cells more effectively, seemed most important, although more research is needed. “We know some of the mutations involved but we don’t know the whole story,” he added.

Of the existing variants, Beta that emerged in South Africa appears to be the most able to reinfect the vaccinated. Fears over Beta led the UK to this month place France in a special “amber plus” travel category. French experts say the UK has miscalculated, as Delta is rapidly displacing Beta as France’s dominant variant.

The Beta proportion of cases in France has fallen from about 20 per cent at the start of June to 2 per cent, according to the Nextstrain database. “The Beta variant has been replaced by the Delta variant everywhere where it has been co-circulating. It’s less ‘fit’,” said Sylvie van der Werf, a molecular geneticist at the Institut Pasteur in Paris.

The precise process through which the virus acquires a series of mutations with sufficient impact to qualify as a new variant remains something of a mystery, though sometimes it may happen within an individual who suffers prolonged infection. 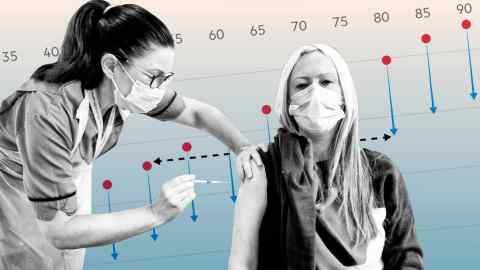 Gupta and colleagues studied a Cambridge patient with an impaired immune system in whom the virus replicated for more than three months before he died. A series of mutations evolved similar to those observed in the Alpha variant, though this one-man variant did not infect anyone else.

“There is some data from Brazil suggesting that Gamma may have evolved there through intermediate forms in stepwise manner during the first wave of the pandemic rather [than] in an individual, though there was not enough genomic surveillance at the time to capture the process,” said Oliver Pybus, professor of evolution and infectious disease at Oxford university.

How much further Sars-Cov-2 can evolve, as it adapts to a host population that is increasingly immunised through infection and vaccination, is as yet unclear.

Most viruses that persist in human populations have eventually become less virulent over a period of decades or centuries — some coronaviruses which now cause mild cold-like symptoms are believed to have started off causing more serious disease — but scientists warn this is not an inevitable process.

“The more the virus circulates, the more it will change,” the WHO’s Kerkhove warned. “Delta will not be the last variant of concern you hear us talk about.”

The Greek alphabet may be insufficient to cover them all.

Teens’ brains aged faster during the first year of the pandemic, study says, and stress may be to blame

Who will the new Alzheimer’s drug help?

Why Will the Upcoming Cyclone be Named ‘Mandous’?

Weather News December 6, 2022
© 2022 Empire Stories is a Flag Media LLC Publication. All Rights Reserved.
ES is part of the FLAG Token rewards network. Clients and partners can use FLAG Tokens for ES products and services.
ES runs 'Automatic' software. Stories posted here come from generic-topic Google news RSS feeds as well as client and partner-approved content.
If a story appears on this page that needs to be deleted due to licensing issues, please message us immediately so we can help you.