Home Latest Health COVID, flu, colds and RSV: Can more than one hit you at... 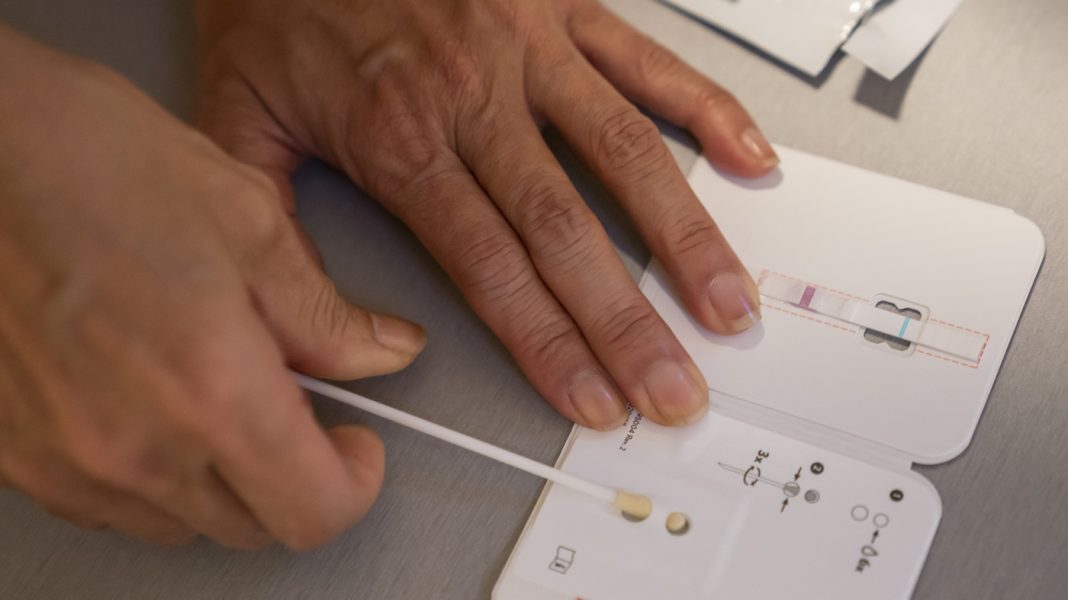 With COVID, flu and cold viruses spreading widely this winter, researchers looked into whether you can get infected with more than one at once.

With COVID, flu and cold viruses spreading widely this winter, researchers looked into whether you can get infected with more than one at once.

If you’re like most Americans, someone in your family or social circle is sick right now with COVID, flu, a cold or RSV. With the rolling waves of sickness hitting many households, some people are wondering: Could I have caught more than one of these germs at the same time?

The answer is: Yes, it can happen. There’s plenty of evidence of people testing positive for, say, COVID and the flu or flu and RSV simultaneously.

“Absolutely, you can catch more than one virus at the same time,” says Dr. Tina Tan, a pediatric infectious disease specialist at Northwestern University.

“We’ve had kids that have actually had three different viruses. Some of them come in with RSV. They’ve also had influenza and enterovirus. There have been other kids who have presented with COVID and influenza.”

The risk for multiple infections is especially high this year because so many viruses have been surging together.

It’s unclear just how often this happens because most of the testing for this sort of thing is done on hospitalized patients, who probably aren’t representative of the general public. But some studies have found co-infections in up to 20% of those patients.

The risk, however, doesn’t appear to be the same for everyone. Children appear to be far more likely to get more than one bug on top of the other, especially very young kids, researchers say.

“About 20% of infants less than six months of age hospitalized with the flu have had co-infection with RSV,” says Dr. Shikha Garg, a medical epidemiologist at the Centers for Disease Control and Prevention. That number drops to about 13% of kids six months to 2 years old and less than 5% for 5 years and up.

The reason children are more prone to co-infections is unclear, but there are theories.

“It could be just because they’re constantly being exposed to respiratory infections,” says Amanda Jamieson, who studies viruses at Brown University. “But it could also be that they’re immune systems just haven’t built up the immunity that older people have.”

That said, co-infections can occur at any age, especially among older people and others with weaker immune systems.

At the same time, there is growing evidence that co-infections can be more serious then just getting sick with one virus at a time. In fact, a new CDC study released Wednesday finds that’s the case.

The study, which was published in the journal Pediatrics, involving more than 4,000 hospitalized kids found those who had COVID plus another virus, such as a cold virus, were significantly more likely to require oxygen to help them breathe and to end up requiring intensive care.

“We found that children under five had about twice the odds of having severe illness when they had a [<co-infection] compared to when they just SARS-CoV2 infection,” says Dr. Nickolas Agathis, a pediatrician and a medical officer with the CDC who led the study. “The children under two who has RSV were twice as likely to have severe illness compared to children who just had COVID and not RSV also.”

The results underscore the importance of testing patients hospitalized with respiratory infections to make sure they’re getting the right treatment, Agathis says.

The reason why co-infections would be more severe that isn’t entirely clear, but it could be because multiple infections cause more inflammation and because different respiratory viruses damage the lungs in different ways.

“It’s almost as though you’re getting punched more than once, and that can make you sicker,” says Dr. William Schaffner, an infectious disease specialist at Vanderbilt University.

The best thing people can do to reduce the risk is all the things people have been doing the last few years to protect themselves from infection during the pandemic: Get vaccinated, against both COVID and the flu; wash your hands a lot; and wear a mask in crowded, poorly ventilated places and around sick people.

“Getting vaccinated with influenza and SARS-CoV2 vaccines and staying up to date on that is critical for protecting children as well as community and family members,” says Dr. Fiona Havers, a medical epidemiologist at the CDC. “Staying home when you’re sick is critical.”