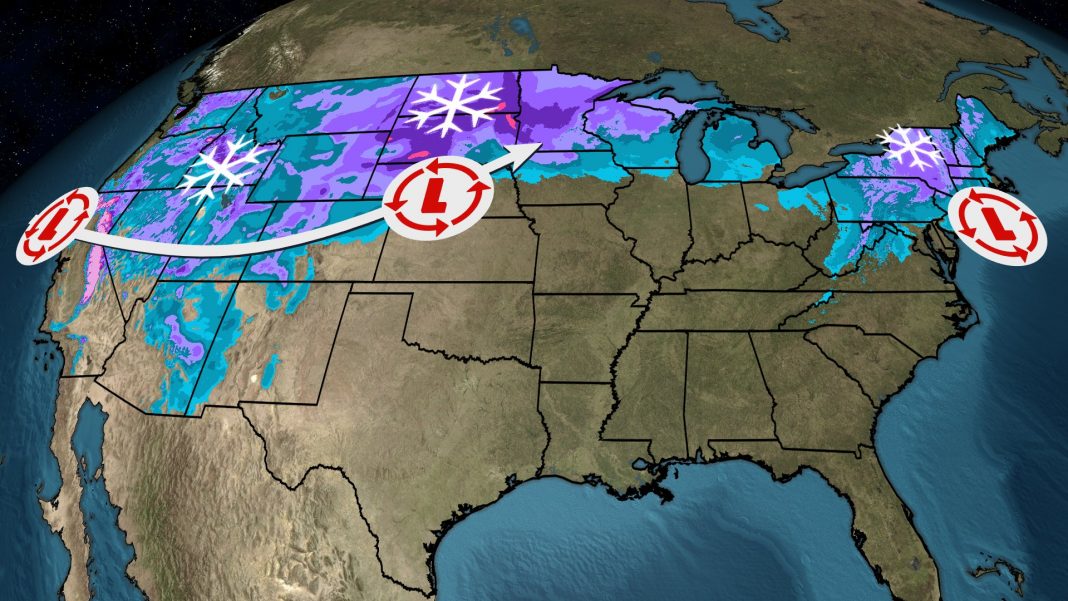 A​ major winter storm will blanket California and the West through the weekend, then become a Northern Plains blizzard, then could dump significant snow in parts of the Northeast later next week.

T​his will be the first winter storm that will have impacts from coast to coast so far this season. This system also has a threat for severe thunderstorms in parts of the South. For details on that, click here.

T​hat’s because a powerful, southward plunge of the jet stream will plow eastward across the country this weekend into late next week.

L​et’s take a region-by-region look at what to expect and when.

This winter storm is now arriving in the West. Winter storm warnings have been issued by the National Weather Service from Washington state to California’s Sierra Nevada. Other winter weather alerts extend into the Great Basin and parts of the Rockies.

In the Cascades of Washington and Oregon, snow should be heaviest through Saturday, but some snow showers could linger into Sunday.

In California’s Sierra Nevada, snow should be heaviest both days this weekend, then diminish by Monday.

I​n the Rockies, snow should increase this weekend from Montana and Idaho to northern Arizona by Sunday, then spread into the high country of Colorado and northern New Mexico by Monday.

We expect multiple feet of snow from this storm in California’s Sierra. That’s likely to make travel treacherous this weekend and may require shutdowns of Interstate 80 through Donner Summit, at times.

O​therwise, over 6 inches of snow is a good bet in much of the West’s higher elevations. Some accumulations to valley floors in the Great Basin (Boise, Salt Lake City) will also lead to slippery travel. Check road conditions if you’re traveling to the high country.

This winter storm spreads into the Northern Plains Monday.

L​ater Tuesday into Wednesday, that snow may spread into parts of Wisconsin and northern Michigan.

T​his snow could last through Wednesday or even Thursday from eastern Montana and northern Wyoming through northern Michigan, diminishing slowly from west to east.

It’s still a bit too soon for precise snowfall totals, but given how long this strong storm will last, much of the Northern Plains has a high chance of picking up at least 6 inches of snow.

M​uch of the Dakotas and parts of western Minnesota have the best chance of picking up at least a foot of total snow.

This heavy snow will be accompanied by strong winds as low pressure intensifies in the Plains.

B​lizzard conditions are possible in some parts of the Northern Plains Monday night into Tuesday, possibly lingering into Wednesday.

T​his could make travel dangerous – if not impossible – at times, across the Dakotas, eastern Montana, eastern Wyoming, western Nebraska, and western and northern Minnesota. Blowing and drifting snow could reduce visibility and make some roads impassable. Consider ending any travel in these areas by Monday afternoon, or postpone travel plans until after the storm.

Some power outages are also possible due to the force of high winds and the weight of heavy, wind-driven snow.

Later in the week, this storm moves toward the East. Here’s where the forecast becomes complicated.

F​irst, we expect a couple of early-week cold fronts to deliver at least some cold air to the East ahead of this storm.

T​hat’s important because as moisture from the storm begins to override that cold air, some snow, sleet or freezing rain could break out in parts of the East as soon as late Wednesday or Thursday.

A​fter that, low pressure is expected to form near or off the East Coast Thursday. Where that low tracks will play a large role in how much, if any, snow the Northeast may pick up late next week, and where it would fall.

The possibilities range from a low tracking so far out to sea there’s little or no additional precipitation anywhere in the Northeast, to a track just offshore but with enough cold air to wring out at least some snow closer to the coast, to a track along the coast or inland with snow mainly in the interior Northeast but rain at least for a time near the coast.

I​t’s far too soon to tell which of these scenarios will occur in the East; C​heck back for updates as the forecast comes into focus in the next few days.