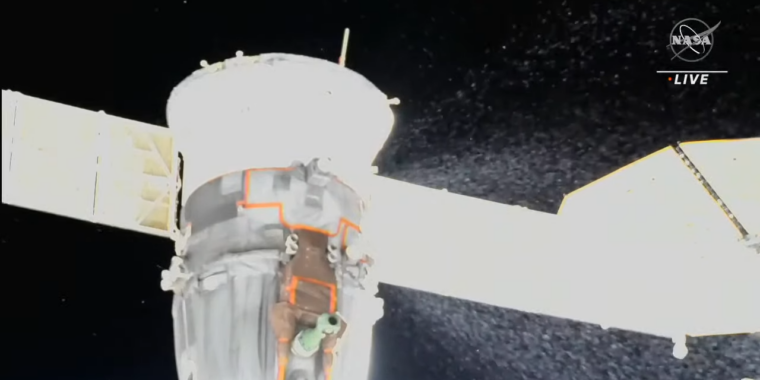 A Russian spacewalk was canceled at the last minute on Wednesday night when a spacecraft attached to the International Space Station unexpectedly sprang a large leak.

Cosmonauts Sergey Prokopyev and Dmitri Petelin were dressed in spacesuits, with the airlock depressurized, when flight controllers told them to standby while the leak in a Soyuz spacecraft was investigated. The spacewalk was subsequently called off shortly before 10pm ET (03:00 UTC Thursday).

The leak appears to have originated in an external cooling loop located at the aft end of the Soyuz MS-22 spacecraft. Public affairs officer Rob Navias, who was commentating on the spacewalk for NASA Television, characterized the spacecraft as leaking “fairly substantially.” Video of the leak showed particles streaming continuously from the Soyuz, a rather remarkable sight. This was likely ammonia, which is used as a spacecraft coolant, although Russian officials have not confirmed this.

At no time were any of the crew members on the space station in danger, including Prokopyev and Petelin, their fellow cosmonaut Anna Kikina; NASA astronauts Frank Rubio, Nicole Mann and Josh Cassada; and Japanese astronaut Koichi Wakata. The leak was external to the station, not inside the orbiting laboratory.

However, the leak does raise questions about the viability of the Soyuz spacecraft, which is the ride back to Earth for Prokopyev, Petelin, and NASA’s Frank Rubio. They launched to the space station back in September on board this Soyuz vehicle, and are due to return to Earth next spring. After three hours Monday night the leak remained ongoing, showing no sign of abating.

The Soyuz is a hardy spacecraft, so it is plausible that there may not be any impact on its ability to undock from the space station and return to Earth. However, if Russian engineers—and those from NASA, considering that Rubio will be on board—determine there is an issue, a replacement Soyuz would need to be flown up to the station. Soyuz vehicles do have the capability to launch and dock autonomously. However, it would mean that, until such time as the replacement spacecraft arrived, the three crew members would have no emergency escape vehicle.

The other four astronauts on board the station flew up on a SpaceX Crew Dragon spacecraft in October. That vehicle cannot accommodate seven people for a return to Earth.

Given the long duration of the leak, NASA is also likely to have concerns about the impact of all that ammonia on space station surfaces and those of other docked vehicles. Much of the ammonia would probably boil off the surface of the hardware over time, but it will certainly complicate operations as the US space agency works toward conducting a spacewalk of its own on Dec. 19 to install new solar arrays.