Home Latest science 50 Years After the Apollo 17 Mission, the Moon Looks Closer Than... 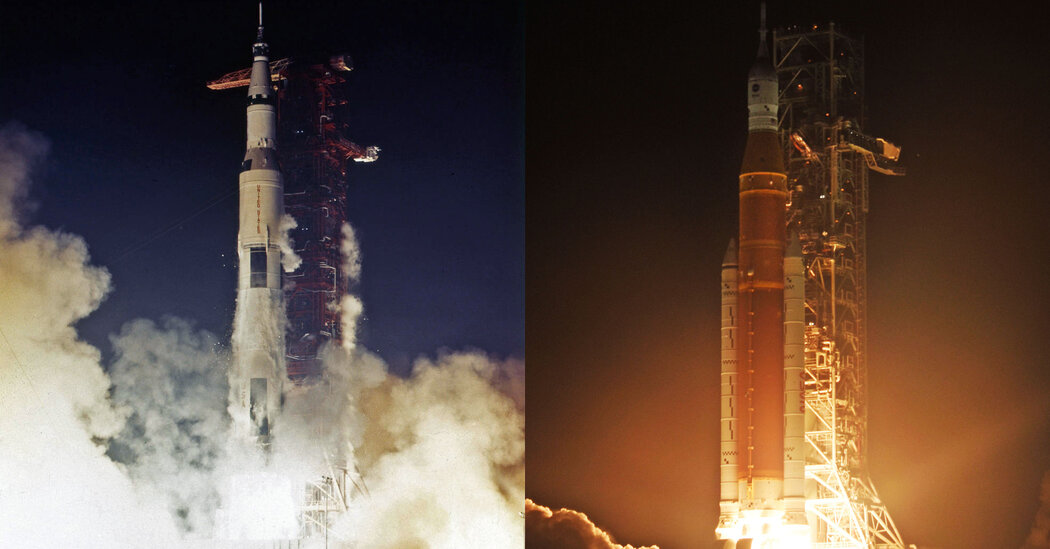 Fifty years ago today, two men woke up on humanity’s last day on the moon.

Nobody would be back to the moon anytime soon. Plans for additional Apollo missions had been scrapped two years earlier, in 1970. A few minutes ahead of their scheduled wake-up time, two NASA astronauts, Eugene A. Cernan and Harrison Schmitt, called home from Apollo 17’s smelly, dust-strewn lunar module to croon “Good morning to you” down to Earth. Mission Control responded with a blast of “Also Sprach Zarathustra,” recently famous from “2001: A Space Odyssey,” the Stanley Kubrick film that imagined permanent lunar outposts and human journeys to Jupiter

Their formal goodbyes had already been delivered to the TV cameras. The only thing left to do was to work down a few prelaunch checklists, depart to meet with Ronald E. Evans in the command module and then head home to Earth. “Now, let’s get off,” Cernan said, and so they did, their craft climbing up from the moon’s gray desolation until it was lost in a black sky.

While many Americans in 2019 celebrated the 50 years after Apollo 11 first put Neil and Buzz on the moon, Wednesday’s anniversary carries more than a twinge of sadness for fans of space exploration. For a brief few years, the Earth and moon were linked by a bridge built through ingenuity, technology and vast sums of taxpayer money.

A few men — only men, only white, all of them except for Dr. Schmitt from the U.S. military — had walked the narrow path across the cold and black and lived to tell the tale. Countless imaginary space futures had blossomed out from this point: spinning space stations, boots on Mars, humanity reaching toward the edge of the solar system. Then it all went up in one last plume of rocket exhaust.

This year, though, the anniversary of the Apollo 17 mission came twinned in time with a new set of lunar imagery in eye-popping high definition. A new NASA mission called Artemis I — Artemis being Apollo’s twin sister, in Greek myth — had finally jetted off to the moon last month with a few mannequins aboard. Once there, it orbited without landing and then sailed home without a hitch, plunking down safely in the Pacific on the same day, Dec. 11, that Schmitt and Cernan had touched down on the moon for the last time, a half-century earlier.

Artemis 1 didn’t land astronauts, and its expected follow-up, Artemis II, will only send a crew of four around the moon and bring them home. But these missions start the path for Artemis III, which should bring a new human crew down to the lunar surface later this decade, this time carrying a woman and a person of color. From a symbolic standpoint, at least, the message was clear: At long last, we’re really on our way back.

Apollo 17, like Artemis I, launched from Earth at night. It was a fitting setting for the figurative twilight of the Apollo program. “If this was a novel, it would be a scene that would be too ham-fisted,” said Lois Rosson, a historian of science at the University of Southern California.

That symbolism wasn’t missed, seven miles off what was known at the time as Cape Kennedy, where a cruise ship laden with space-age-era luminaries — the writers Isaac Asimov, Robert Heinlein and Norman Mailer, alongside scientists like Carl Sagan, Frank Drake and Marvin Minsky — had assembled as a focus group on the future of space exploration.

Many of these attendees felt Apollo’s cancellation showed the pitfalls of letting the government drive space exploration. The Vietnam War, the struggle against poverty and sagging public support had all placed Apollo and the grand designs of space enthusiasts in the cross hairs of Congress and the Nixon administration. Perhaps a more private, corporate space effort — not unlike SpaceX, which would emerge in the 2000s under Elon Musk — would be a better model.

“That’s where the seeds of that ideology first get planted,” Dr. Rosson said.

On the moon, the astronauts had jobs to do. Apollo 17 hauled back more rocks than any other mission. At one point, the astronauts drove their lunar rover a record-breaking, terrifying-when-you-think-about-it 4.7 miles away from the sanctuary of their lunar module. In Dr. Schmitt, they also had the only trained geologist ever to walk on the lunar surface. “Nothing like putting yourself to sleep thinking about unrealizable dreams,” he wrote later, describing his state of mind after the last moonwalk.

The samples they and the preceding Apollo astronauts ferried back became foundational for lunar science. These rocks helped show, for example, that the moon probably formed after an extremely violent collision between baby Earth and another protoplanet. Lunar rocks from Apollo 17 also hinted that future astronauts might be able to hunt down resources like water and titanium, said David Kring, a planetary scientist at the Lunar and Planetary Institute in Houston.

Entire scientific careers have started and ended waiting for a successor mission like Artemis. “I have several colleagues who are just a little bit older than me, and they’ve had to retire before they see this,” Dr. Kring said.

Hope is now rising. Not that everyone loves Artemis; we have, of course, been to the moon before. The current plan to return dates to the Trump administration and was presented by President Donald J. Trump along with the idea of always putting America first. President Biden has embraced that timeline and framework, too.

The post-Apollo debate over who should lead space exploration rages on, too. Artemis I rode to space on an over-budget, oft-criticized megarocket built through NASA’s traditional model of managing private contractors. Artemis III, meanwhile, is booked for a moon landing on a new spacecraft under development using a commercial approach at SpaceX. Mr. Musk’s company has received contracts worth billions of dollars to provide lunar landers.

A half-century later, disagreements persist about why we go to the moon. Or how. Or whether we should even try. Yet it’s hard to see the new imagery and not feel something.

After lifting off, the Apollo 17 astronauts orbited the moon, then burned fuel to begin the trip back to the blue-green marble rising above the lunar horizon. It had been an unseasonably warm December in 1972. At that time, freshwater dolphins still swam in the Yangtze River, golden toads still hopped through the cloud forests of Costa Rica and there were more than two northern white rhinos alive.

Fast-forward 50 laps around the sun, when Artemis I captured a similar view during its last close approach to the moon before heading home, albeit of a crescent Earth another degree Fahrenheit hotter and with four billion more people. Engineers on the ground paused, gawking. “We just sat there and absorbed what we were looking at for about a minute, and the room was just absolutely silent,” said Mike Sarafin, the Artemis 1 mission manager at NASA.

“Some of what we’re living right now, with our brothers and sisters from Apollo, is that they’ve shared wisdom with us that we’re just now really appreciating,” Mr. Sarafin said.